Written by Dr. Meenakshy Varier
Medically Reviewed by The Medindia Medical Review Team on February 25, 2017 at 11:10 AM 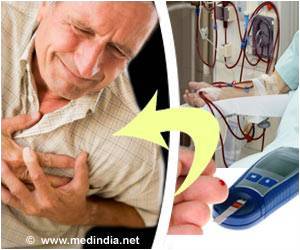 Biological pathways that are involved in diabetic kidney disease has been revealed by a research team from the Icahn School of Medicine at Mount Sinai, providing hope that both early diagnostic tests and targeted treatment can be designed.

The study shows that oxidative stress in the "power plants" or mitochondria within the endothelial cells of the glomerulus in the kidney progressively impairs the ability of the bean-shaped organs to filter toxins from blood for waste products and produce urine.

The research team also found a cellular receptor that can be blocked to modulate that stress reaction. Blocking that receptor saved the kidneys in mice genetically destined to develop diabetic kidney failure.


An often fatal complication of diabetes is kidney disease. It is difficult to diagnose in early and if diagnosed early it is treatable.

According to the National Kidney Foundation, around 30% of patients with type 1 (juvenile onset) diabetes and 10% to 40% of those with type 2 (adult onset) diabetes eventually will suffer from kidney failure. Patients must then turn to dialysis or kidney transplantation.

Diabetes was the primary cause for 239,837 kidney failure cases in 2012. An estimated 29.1 million people have diabetes and around 40% of people with diabetes will get CKD.

"Diabetic kidney disease is one of the major causes of death in diabetic patients, and is also the leading single cause of end-stage renal disease in the United States," says the study's senior investigator, Ilse S. Daehn, PhD, Assistant Professor of Medicine (Nephrology) at the Icahn School of Medicine at Mount Sinai. "Our findings open new diagnostic opportunities for early detection and potential therapeutic strategies to protect against further renal damage in patients."

The study's findings essentially offer a "fundamental paradigm shift in our understanding of the development and treatment of diabetic kidney disease," says Dr. Daehn, who is also a member of The Charles Bronfman Institute for Personalized Medicine.

Researchers focused on the kidney's glomerulus which are key unit in the filtration of blood for waste products to be expelled in urine.

They used two groups of mice to study three different cell types that interact within the glomerulus.

One group naturally develops diabetic kidney disease and the other group is naturally resistant to the disorder.

In mice prone to kidney disease, the wafer-like endothelial cells that formed the inner lining of blood vessels were affected.

The mitochondria which are the cellular subunits that act like power plants, were stressed, and so made excess amounts of reactive oxygen species (ROS). When over-produced, these molecules can damage cell proteins and DNA.

This process begins to destroy podocytes, cells that wrap around and work with capillaries and the other cell types in the glomerulus.

Researchers discovered a pathway within the endothelium in the glomerulus. This pathway helped to manage oxidative stress triggered by reactive oxygen species (ROS).

This pathway produced excess quantities of a cell receptor, endothelium receptor-A, as well as its ligand. Ligand is the protein that binds to the receptor.

Researchers then inferred that developing a small molecule that blocks the ligand from binding to its receptor, might reduce production of mitochondrial ROS. This will halt the resulting damage to the glomerulus.

On using an experimental small molecule, BQ-123, to specifically block this receptor in mice who would naturally develop the diabetic kidney disease, they found that this molecule stopped the disease progression.

Researchers confirmed their hypothesis by testing urine and kidney biopsies from patients with diabetic kidney disease.

"These findings in human samples go a long way to substantiate our hypotheses, which is exciting because it represents a new way forward to understanding and treating diabetic kidney disease," Dr. Daehn says.

The study is published in Diabetes.

Postoperative Delirium More Likely in Elderly surgical Patients Who Have Diabetes
Elderly surgical patients are more likely to suffer from debilitating post-operative delirium if they have diabetes, undergo longer surgery or respond poorly to stress.

A-Z Drug Brands in India How to Reduce School Bag Weight - Simple Tips Blood Pressure Calculator Indian Medical Journals Sinopril (2mg) (Lacidipine) Accident and Trauma Care The Essence of Yoga Iron Intake Calculator Noscaphene (Noscapine) Blood - Sugar Chart
This site uses cookies to deliver our services.By using our site, you acknowledge that you have read and understand our Cookie Policy, Privacy Policy, and our Terms of Use  Ok, Got it. Close
×