Written by Shaun DMello
Medically Reviewed by The Medindia Medical Review Team on June 20, 2015 at 5:41 PM 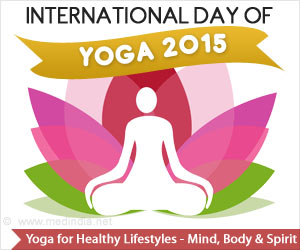 Yoga is one of the most popular of all fitness routines, but it is so much more than a fitness or exercise routine. Yoga is a holistic discipline that addresses your physical, mental and spiritual needs. Because of this comprehensive approach that yoga takes to healthy living and fitness it has gained popularity across the world and is now even used as a part of complimentary therapy in the treatment of various health conditions. Despite its global acceptance and recognition, the practice still languishes at home in India, where the practice originated.

Importance of Doing Yoga | Benefits of Yoga
Yoga is good for overall health. It is a practice which controls an individual's mind, body and soul. The benefits of practicing yoga are a healthy and balanced life.
Advertisement

As India has undergone a process of rapid urbanization and development, and continues to witness a huge growth in urban populations, the practice of yoga becomes all the more important. Yoga is a traditional Indian practice of exercise that uses a combination of physical poses or asanas, breathing exercises or pranyamas and meditation techniques. The practice has been found to improve flexibility, balance and fitness levels, improves respiration, builds focus and concentration and lowers stress levels. In doing so, it greatly reduces the risk of various stress related disorders making it invaluable to the modern lifestyle, which is plagued, by lifestyle disorders such as obesity, diabetes and heart disease. This year, at the behest of the Indian Government, 21st June was declared 'International Day of Yoga' to encourage renewed global interest in the discipline and greater awareness about yoga benefits and public participation here at home.

Understanding the Importance of Yoga

Physical exercise and fitness: Yoga practice is invigorating and greatly improves physical health and fitness levels. While this comes as no surprise to most of us, those of us untrained and unpractised in the discipline find it hard to imagine ourselves practicing yoga. Advanced yoga can be extremely complicated and some of the poses and routines can appear to be impossible to anyone but a body contortionist. Nevertheless, yoga is one of the simplest and most adaptable forms of exercise. Yoga for beginners starts out with simpler and less strenuous yoga poses making the practice extremely easy, while at the same time strengthening the body and better preparing you for the next stage. The practice and sequence of poses can be adapted and adjusted as you progress to keep you challenged and motivated, while addressing any physical fitness needs you may have. Some of the physical benefits of the practice of yoga with asanas as a physical exercise include improved flexibility and strengthening of the muscles. Depending on the pace of the routine and types of poses involve yoga can also serve as a good cardio workout and it greatly helps improve circulatory health. Because of increased flexibility and range of motion, athletic performance can also be greatly improved. One of the most popular aspects of the discipline is yoga for weight loss, as obesity is one of the most common and widely prevalent of all modern lifestyle diseases.

Yoga positions for beginners
Valuable tips for the beginners of yoga and the beneficial aspects of practicing it. It also briefs about how meditation, Pranayama and asanas transforms oneself both inwardly and outwardly
Advertisement
Mental and intellectual health: Yoga has long been touted as a cure to various modern ills and in some contexts modern medicine has begun to find this to be increasingly true. Almost all modern diseases and health conditions are stress related. It appears that the modern urban lifestyle is so unnatural, fast paced and stressful that we are slowly buckling under the pressure with a whole range of psychological disorders, anxiety disorders, depression, stress and stress induced physical illnesses like diabetes and heart disease. Yoga's comprehensive approach to human health and well-being helps to address all of these concerns. As farfetched as this may sound it is true and is supported by several studies. Yoga therapy is even used as a treatment approach to various health conditions, especially behavioural problems, anxiety disorders and so on. The yoga practice of breathing exercises in combination with poses and meditative practices helps to completely calm the mind and relieve you of stress. Such meditative practices greatly help to improve focus, concentration and attention, helping you get better control over your senses and enabling conscious relaxation not just of the mind but also of various muscle groups.

Spiritual Health: Spiritual health and well-being is not exactly something scientific and this is not an aspect of the discipline that can be examined or critiqued within a medical context. Philosophically and spiritually however there can be little denying that yoga offers significant spiritual benefits, probably owing to the improved feelings of mental well-being and the state of inner peace and serenity that is achieved through yogic meditation. Spiritualism is often confused with religion and this does create some amount of personal conflict as practitioners of the three major monotheistic religions are forbidden from participating in any other religious practice. It should be pointed out that although yoga evolved and emerged out of a distinctively Hindu civilization, the discipline itself is not religious. Moreover, in ancient India, Hinduism was not so much a religion as a cultural system and a way of life. Yoga was simply one part of the Hindu way of life. The modern perception of Hinduism as a religion is in fact a construct of the narrow colonial worldview based on religious exclusivity.

This said, it should be pointed out that the meditative practices of yoga that make it so effective in promoting mental health and emotional well-being are also instrumental in the arousal of feelings of spirituality. The more tranquil and peaceful the mind, the greater are the feelings of spirituality and union. The chanting of mantras adds to the spiritual experience, but this is not crucial to the practice of yoga. While purists argue that yoga cannot be practiced without such spiritual overtones, most experts disagree and the discipline is widely practiced by millions across the world today, very often without the spiritual aspects. It has in many ways become a completely secular, scientific and modern practice.

Yoga is also extremely simple, non-strenuous, inexpensive and not very time consuming. Practicing yoga for just twenty minutes a day can make a huge difference on your quality of life. Another advantage is that yoga doesn't require any specialized gear or equipment. Simply learn the basics from a skilled yoga instructor and you're good to go. All you need to do now is to get off the couch and hit that yoga mat.

An inspiring and interesting video on yoga can be found on this link - https://www.youtube.com/watch?v=y8gPzYEt4U8

Physiological benefits of yoga
Yoga, an ancient system of healing helps to cure hypertension, caused due to stress and strain of the modern lifestyle and normalizes the pressure in the blood vessels of an individual

Seven Chakras and Our Health
News Archive
News Resource
Advertisement
News Category
JUUL E-Cigarettes Banned from US Market Busy Americans Get The Least Sleep At 40 Years Deepika Padukone Rushed To Hospital After Sudden Chest Pain Vegans, Vegetarians and Fish Eaters Have Better Memory Than Meat Eaters How to Reduce the Risk of Acute Kidney Injury By Drinking Coffee?
More News
Sign up for Wellness Consult a Doctor Sign up for Selfcare