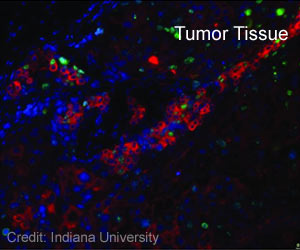 The evidence for a link between prostate cancer, which affects millions of men age 50 and older, and Ewing's sarcoma, a rare form of cancer that affects children and young adults, has been identified.

The study was conducted by researchers at Indiana University, Bloomington and the results are reported in the journal Cell Reports.

The report suggests that the molecular mechanism that triggers the rare disease Ewing's sarcoma could act as a potential new direction for the treatment of more than half of patients with prostate cancer.


Ewing's sarcoma is a form of bone and soft tissue cancer that affects about one in 1 million children and young adults age 10 to 19. It is terminal in 44% of teens aged 15 to 19 years and 30% of children.

"This research shows that the molecular mechanism involved in the development of most prostate cancers is very similar to the molecular mechanism known to cause Ewing's sarcoma," said Peter Hollenhorst, an associate professor in the medical sciences program at IU Bloomington, a part of the IU School of Medicine. "It also suggests that this mechanism might be used to explore a common treatment for both diseases, one of which is not often pursued by drug companies due to its rarity."

There are 28 genes in the human body known as ETS genes, four of which are known to produce proteins that cause prostate cancer.

These four cancer-causing genes, or "oncogenes," are called ETV1, ETV4, ETV5 and ERG, the last of which has been implicated in over 50% of all prostate cancers. The other three combined play a role in about 7%of prostate cancers.

Ewing's sarcoma results from errors in the chromosome repair process that causes the merger of two separate gene segments into a mutant hybrid gene, also known as a chimeric or fusion gene. One of these genes is called EWS, the other is a gene that produces ETS proteins.

Hollenhorst's study is the first to show that the proteins produced by the EWS gene interact with all four ETS proteins known to trigger prostate cancer.

The EWS protein only interacts with proteins from these four harmful ETS genes, not the other 24 ETS genes not found to play a role in prostate cancer.

"A molecular mechanism that sets these four genes apart from the ones that don't trigger cancer has never been identified until now," Hollenhorst said. "This is significant because it suggests that any compound that disrupts EWS-ETS interaction would specifically inhibit the function of the four oncogenes and not the others, which play important roles in the healthy function of the body."

IU scientists used a combination of laboratory experiments and mouse models to observe the interaction of EWS and ETS proteins in prostate cells.

In experiments at the IU School of Medicine, they also introduced the ERG gene into normal human prostate cells in mice, which triggered the formation of tumors.

The scientists then introduced an artificial mutation in the ERG gene to disrupt interaction with the proteins produced by the EWS gene. In these mice, the tumors failed to form.

"Together, the results indicated that the interaction between ERG and EWS is important for tumor formation," Hollenhorst said. "We chose to focus our greatest efforts on the ERG protein since it is responsible for over 50% of all prostate cancers, and therefore the potential to benefit the greatest number of people."

Quiz on Prostate Cancer
Prostate cancer is fast gaining as a common cancer form among men; more threatening since its symptoms often go unnoticed until it's too late. This quiz tests your knowledge on prostate cancer, its diagnosis and treatment options and is as mandatory for men as the screening tests mentioned here are!

Androgen Deprivation Therapy for Prostate Cancer and Risk of Dementia  A Retrospective Study
Androgen deprivation therapy (ADT) for prostate cancer may be associated with an increased risk of dementia, finds a retrospective study.

Tattoos A Body Art
News Archive
News Resource
Advertisement
News Category
Death Caused by a Rare Type Amoeba: Research Study Japan Approves Smallpox Vaccine for Monkeypox Did Human Evolution Shrink Your Brain? What to Do When Your Asthma Medication Doesn't Work? Which is Better to Improve Smoker's Health  Cigarettes or E-Cigarettes?
More News
Sign up for Wellness Consult a Doctor Sign up for Selfcare