Vitamin C supplementation to pregnant women who smoke reduces the risk of lung damage in their infants, according to a recent randomized control study led by Dr. McEvoy, professor of pediatrics at Oregon Health & Science University. The findings of this study appear in the American Thoracic Society's American Journal of Respiratory and Critical Care Medicine.

Thus, the findings of the study suggest that vitamin C plays a protective role in limiting lung injury of babies whose mothers smoke during pregnancy. The team also plans to continue follow-up of these infants to monitor their lung function and respiratory health.


‘Vitamin C supplementation is a simple and inexpensive way to protect several infants from the harmful effects of maternal smoking but, the chief goal of healthcare personnel should be to help the women quit smoking.’
Read More..


In the words of Dr McEvoy, "Finding a way to help infants exposed to smoking and nicotine in utero recognizes the unique dangers posed by a highly advertised, addictive product and the lifetime effects on offspring who did not choose to be exposed."

Vitamin C (ascorbic acid) is an antioxidant and helps prevent damaging of various tissues including the lungs. Oxidative stress causes injury and cell death due to the accumulation of free radicals such as peroxides within the cell.

Smoking reduces the levels of ascorbic acid resulting in decreased antioxidants to counter the oxidative stress by eliminating the free radicals.

Exposure of the fetus to smoke can thus cause lung damage and reduce lung function. Supplementing vitamin C to the mother restores antioxidant activity to counter the damage caused by free radicals and improve lung function.

Previous research on the subject has shown that lung function measured on Day 3 of life was better in babies born to mothers who smoked and were given vitamin C (500 mg/day) supplementation during their pregnancy compared to babies of mothers who were randomized to placebo.

Future plans include evaluating
In conclusion, although vitamin C given to pregnant women who smoke helps lower the risk of lung damage in the baby, the primary aim should be to help the woman give up smoking since smoke exposure can cause obesity, behavioral disorders and other serious health issues later in these children.

Health Hazards of Smoking: Pregnancy
Smoking during pregnancy increases the risk of pre-term delivery, leads to still births. It may slow down fetal growth.
READ MORE

Nicotine Patch Better Than Smoking for Pregnant Women
While nicotine may not be completely safe for a pregnant mother's foetus, nicotine replacement therapy is safer than smoking for women.
READ MORE

Smoking During Pregnancy Linked To Infertility In Male Children
Women who smoke during pregnancy are at a risk of having boys with low sperm count in their adulthood.
READ MORE 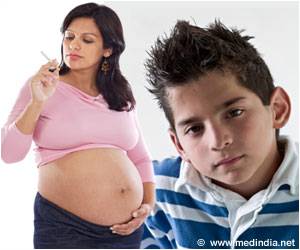