What is Chronic Obstructive Pulmonary Disease?

Chronic obstructive pulmonary disease (COPD) is a group of respiratory tract disorders where there is obstruction to airflow, which is not completely reversible and is usually progressive. 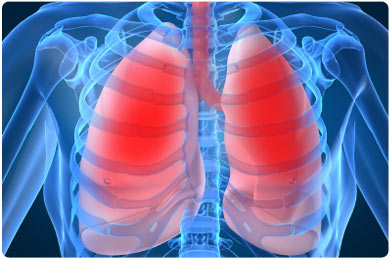 Air normally enters the respiratory system via the nose and mouth while breathing. The muscles of the chest and the diaphragm (a muscular partition between the chest and the abdomen) aid in this process. The inhaled air passes through the throat and reaches the wind pipe or trachea. The trachea divides into two branches in the chest, the left and right bronchi. Each bronchus further divides and re-divides into smaller branches, finally forming very small branches called the bronchioles. The bronchioles end in small air sacs called the alveoli in the lungs. The alveoli are elastic, enabling them to expand and contract with breathing. A number of small blood vessels lie close to the alveoli. The air from the trachea passes through the bronchi and bronchioles and reaches the alveoli. Oxygen from the air diffuses through the alveolar wall into the blood and carbon dioxide from the blood diffuses into the alveoli. Thus exchange of gases takes place at this level. Carbon dioxide then is thrown out through the bronchi, trachea and nose and mouth while breathing out.

COPD includes respiratory tract disorders which cause obstruction to airflow. These are:

The patient suffers from symptoms of cough, breathlessness and sputum production. Breathlessness may initially be experienced when the patient physically exerts himself, but later it may appear even at rest. Attacks of COPD may occur more and more frequently as the disease progresses.

The patient is treated using drugs that widen the air passages like tiotropium and salmeterol, other drugs like corticosteroids and theophylline, and oxygen. Surgery including lung transplantation may be required in some cases. The patient should be strongly advised to quit smoking.

1. Measles during Childhood May Up COPD Risk in Middle-age

Measles during early childhood can increase the risk of developing chronic obstructive pulmonary disease (COPD) in middle age. Measles also known as morbilli or rubeola or red measles, is a highly contagious viral disease caused by a virus belonging to paramyxovirus family. It causes upper respiratory symptoms, fever and rash.

Am from Jordan, I was diagnosed with Emphysema [COPD] in 2013 and I have tried all possible means to get cured. I even visited a pulmonologist but to no avail, until I saw a post in a health forum about a herbal clinic from China that prepares herbal medicine to cure all kinds of diseases including COPD and Emphysema. At first, I doubted if it was real but decided to give it a try, when I contacted this herbal doctor via theÂ website which I got an email from them, they sent me the Emphysema herbal formula through courier service, and when I received this herbal medicine they gave me step by step instructions on how to apply it. I applied it as instructed I was totally cured of COPD Emphysema within almost five months of usage. You can as well Contact them onÂ Â multivitamincare .org orÂ  (Call/SMS):Â  1 -956- 758-7882 Kind Regards

Emphysema
Emphysema is a chronic obstructive pulmonary disease, marked by alveolar damage and reduced air flow to lungs leading to breathlessness and cough.

Laryngectomy - Surgical Procedure
Find out how smoking increases risk for throat cancer and the use of laryngectomy, which is a surgical procedure to remove the larynx and ways to restore voice.

Hypoxia
Hypoxia is the term used to denote a deficiency in the amount of oxygen reaching the tissues.
Sign up for Wellness Consult a Doctor Sign up for Selfcare
Advertisement
Health Topics A - Z
A B C D E F G H I J K L M N O P Q R S T U V W X Y Z

How to Reduce School Bag Weight - Simple Tips Color Blindness Calculator Drug Interaction Checker Vent Forte (Theophylline) A-Z Drug Brands in India Drug - Food Interactions Blood Donation - Recipients The Essence of Yoga Find a Hospital Noscaphene (Noscapine)
This site uses cookies to deliver our services.By using our site, you acknowledge that you have read and understand our Cookie Policy, Privacy Policy, and our Terms of Use  Ok, Got it. Close