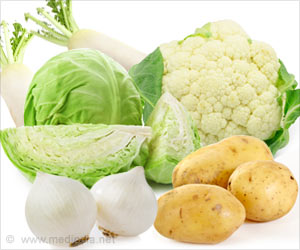 Consuming potatoes and cabbage can help reduce the risk of developing stomach cancer, indicates a new study conducted by scientists at Zhejiang University in China.

Despite its amazing health benefits, potatoes have earned a bad reputation because of how they are topped, prepared and cooked. One of the classic examples is a packaged food brand of potato chips (there are many food brands), which contain more calories, fat, and sodium. However, this study confirms eating potatoes is healthy.


The study reveals that people who consume a lot of white vegetables, such as cauliflower and onions, are a third less likely to develop stomach cancer than those who did not consume them. But the risk was raised by beers, spirits, preserved food, and salt.


‘People who consume a large amount of white vegetables like potatoes, cabbage are a third less likely to develop stomach cancer than those who did not consume them.’


Stomach cancer is the fifth most common cancer worldwide. Stomach cancer is more common in men than in women. About 95% of gastric cancers occur in people aged over 55 years, and the cancer risk rises steeply from the age of 60. According to the World Health Organization (WHO), a total of 952,000 cases diagnosed in 2012. It represented about 8.5% of cancer cases in men, making it the fourth most common cancer in men in the same year. As many as 700,000 deaths due to stomach recorded on 2012, which was a slight decrease from 774,000 in 1990. Stomach cancer was the third leading cause of cancer death in 1990.

The Zhejiang scientists used 76 previous studies of diet and stomach cancer that have involved 6.3 million people and analyzed 33,000 deaths from the cancer.

"The decreasing incidence of gastric cancer in developed countries may be partly the results of increased use of refrigeration, availability of fresh fruit and vegetables, and decreased reliance on salted or preserved foods. Both fruit and white vegetables are rich sources of vitamin C, which showed a significant protective effect against gastric cancer by our analysis," authors wrote.

Researchers noted that the intake of salt increased the risk of developing stomach cancer by 12 percent.

"Furthermore, we found concordant positive associations between high-salt foods and gastric cancer risk. In addition, a strong effect of alcohol consumption, particularly beer and liquor but not wine, on gastric cancer risk was observed compared with nondrinkers.

This study provides comprehensive and strong evidence that there are a number of protective and risk factors for gastric cancer in diet," they added.

The study may have significant public health implications concerning prevention of stomach or gastric cancer and may help design clinical trials of future cohort studies.

Potatoes For a Healthy Weight Gain

Weight gain is seen as a bad thing! It is the fact that obesity is a big public health problem in the world today. However, there are some individuals who need to gain weight for a variety of reasons. If you want a healthy weight gain, then potato is one of the best foods you can add to your diet. Most people instantly cut potatoes from their diet when they are trying to lose weight. More than just weight gain benefits, potatoes are also rich in fiber and vitamin C.

You can Eat Potatoes and Still Get Slim!

A study recently published in the Journal of the American College of Nutrition states that potatoes aren't necessarily bad for the waistline. Researchers claim that it could actually help us lose weight. The study found that individuals who included potatoes in their diet plans all lost weight - as long as they controlled their overall calorie intake.

The researchers said that there is no proof that potatoes lead to weight gain if they are prepared in a healthy manner. They studied the role of lowering calories and the glycemic index (GI) affected weight loss when potatoes are included in the diet plan. The GI is a scale of zero to 100 representing how quickly glucose is pumped into the bloodstream after consuming carbohydrates.

Potato chips are calorie-dense because of the fat they are cooked in. Let's imagine you normally eat 2000 calories per day. If you eat 500 calories of chips, you will get 25% of your daily calorie. This doesn't mean you get 25% of your required vitamins, minerals, fiber, and protein. That's the problem; it's why fat is sometimes called unhealthy - they don't give you space for the other nutrients you need to eat.

Potato chips are also rich in salt which can increase the risk of stomach cancer. Therefore, it is best to consume boiled potatoes than the fried ones. However, if you really love potato chips, eating them in moderation is perfectly fine. Have them in combination with other more healthy choices.

Potatoes contain iron, phosphorous, calcium, magnesium and zinc. All these elements contribute to the building and maintaining of bone structure and strength.

The potato's vitamin C and vitamin B-6 content, fiber and potassium, coupled with its low cholesterol quality, all support heart health. In a research, individuals who consumed 4069 mg of potassium per day had a 49% reduced risk of death from ischemic heart disease compared to those who consumed less potassium.

Choline is a very important nutrient in potatoes. Choline aids in the transmission of nerve impulses, assists in the absorption of fat, This reduces chronic inflammation.

Potatoes are a great source of vitamin B-6: The vitamin plays a crucial role in energy metabolism by breaking down proteins and carbohydrates into glucose and amino acids.

Crispier 'Potato Roasties', 'Dark Toasties' can Give You Cancer
To minimize the exposure to cancer causing acrylamide, roast potatoes and chips should be cooked to only a light golden color.
READ MORE