Using a continuous glucose-monitoring device connected to the body, researchers from the Stanford University School of Medicine have found out that the sugar in an individual's blood (especially in individuals who are considered healthy) fluctuates more often than thought earlier, and that not all of these "spikes" might be picked up by traditional glucose monitoring methods like the one-and-done finger-prick method.

The device keeps extra-close tabs on the ups and downs of blood glucose levels thereby giving people a whole continuous picture rather than a partial picture of the sugar circulating in their blood.
Diabetic-level Blood Sugar Spikes Noticed in Healthy People


With the help of the device, the researchers have been able to find out that the blood sugar level undergoes "spikes" or a rapid increase, after eating specific foods, mainly carbohydrates, especially in healthy individuals.


‘Continuous glucose-monitoring can help identify individuals who are prediabetic, better than the traditional method, and can help keep them from developing insulin resistance, which leads to diabetes.’


"There are lots of folks running around with their glucose levels spiking, and they don't even know it," said Michael Snyder, PhD, professor and chair of genetics at Stanford and senior author of the study. The covert spikes are a problem because high blood sugar levels, especially when prolonged, can contribute to cardiovascular disease risk and a person's tendencies to develop insulin resistance, which is a common precursor to diabetes he said.

"We saw that some folks who think they're healthy actually are misregulating glucose -- sometimes at the same severity of people with diabetes -- and they have no idea," Snyder said.

The study is published online on July 24 in PLOS Biology.

Most people periodically get their blood sugar levels checked with a quick lance to the finger and a device that reads out the blood glucose concentration. This method of reading sugar levels captures the levels only momentarily. The amount of sugar in a person's blood is not a constant; it ebbs and flows depending on the food intake that day, down to the specific kind of carbohydrate. (For instance, people digest rice, bread, and potatoes which are all different kinds of carbohydrates differently.)


Study - To get a better read on glucose levels

Snyder and his collaborators chose 57 participants, most of them who were healthy or showing signs of prediabetes and five of them who had Type 2 diabetes. They were all fitted with a device that continuously recorded blood glucose levels for about two weeks. The device superficially poked into the surface layer of the skin to take constant readings of sugar concentrations in the blood as it circulated. Data was sent back to the lab; the results showed multiple types of spikers, which were classified into the three basic rankings of spike intensity, namely low, moderate and severe "glucotypes."

The glucotypes are subject to change based on diet. The researchers ultimately had two work goals: One was to catch the spike early and the second was to understand what makes a person spike, and then adjust their diet to bring the glucotype into the "low" range.

The constant readouts are revealing the fact that glucose levels are not normal all the time in the blood; in other words, glucose dysregulation is more common than previously thought.

"We think that these continuous glucose monitors will be important in providing the right information earlier on so that people can make changes to their diet should they need to," Snyder said.


Sub-study - Blame it on the cornflakes

To get into the subtleties of spiking, the researchers conducted a sub-study where they chose 30 participants from the primary study and continuously monitored their glucose while they alternated between three kinds of breakfasts: a bowl of cornflakes with milk, a peanut butter sandwich and a protein bar.
"We saw that 80 percent of our participants spiked after eating a bowl of cornflakes and milk," Snyder said. "Make of that what you will, but my own personal belief is it's probably not such a great thing for everyone to be eating."

Of course, other individual variables like genetics, the population of microbes that live in our bodies (microbiome), and changes in gene expression (epigenetics), have a role in glucose dysregulation and the foods that cause glucose spikes.

Snyder encourages everyone, including the healthy people to check their blood sugar with continuous glucose-monitoring about once a year.

"Right now we have information about people who do and don't spike, or are super-spikers, but we need to get smart about why it's happening," Snyder said. "I think understanding the microbiome and manipulating it is going to be a big part of this, and that's where our research is headed next."

Future goals involve using the framework to compile data from an individual and, based on their continuous glucose readout, make them stay away from particularly "spikey" foods.

HbA1c or A1c Calculator for Blood Glucose
HbA1c calculator calculates average plasma and whole blood glucose levels. A1c test tells your average blood sugar level in the past 3 months and helps check whether your diabetes is in control.
READ MORE
Quiz on Blood sugar
Take this 10 question knowledge quiz on blood sugar - the main source of energy for the trillions of cells of our ...
READ MORE 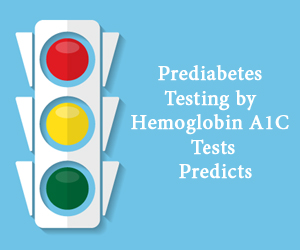