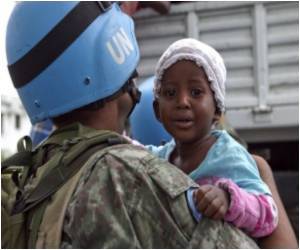 Sudden deaths in Haiti have led the health authorities in the region to conduct an investigation to ascertain the cause.

Ariel Henry, chief of staff of the Haitian health ministry, said epidemiologists were sent to the town of Fonds Baptiste, about 30 kilometers (18 miles) from Port-au-Prince, to investigate the large number of sudden deaths there.

"The victims were said to have died suddenly after being seized with strong migraines, vomiting and struck blind," Henry said, recounting reports from witnesses.


A nurse contacted by telephone by AFP said 16 people had died since the start of the week in the town.

Henry put the number of deaths at about a dozen, while Daniel Epstein, a spokesman with the Pan American Health Organization, said the exact number had not been determined yet.

Women and girls who battled the odds during the earthquake in Haiti and survived, are now troubled by sexual violence and rape, according to Amnesty International.
Advertisement
"We are investigating two groups of deaths... that occurred after a voodoo ceremony," Epstein said, adding that they appeared to be from poisoning.

They may have consumed a homemade alcohol, or eaten fruit from the ackee tree, which contains a toxic compound that can be fatal if the fruit is not harvested and prepared correctly, he said.

Another doctor, who asked not to be identified, suggested the cause of death was probably ethanol poisoning. "The first data gathered show that they had drunk homemade brew," he said.

In a separate medical mystery, the Pan American Health Organization said Haitian and international health authorities were looking into four cases of paralysis in recovering cholera patients in the town of Port-de-Paix.

Three of the four patients died, and one is slowly recovering in a hospital in Port-au-Prince, it said.

"These patients, hospitalized for severe cholera, presented an ascending bilateral flaccid paralysis of acute onset 24 to 72 hours after the end of the cholera treatment," the agency said.

The cases were first reported on January 10 in Haiti's Nord-Ouest Department.

"All of the cases were seen at the same cholera treatment center and returned 2-4 days later with neurological symptoms, at which point they were hospitalized," the agency said.

"Experts including toxicologists are investigating possible contamination at a hospital or at home from medication, food, or another source as the cause of death in these cases," it said.

"Although considered highly unlikely, polio has not been completely ruled out, pending laboratory results of samples," it said.

The experts do not believe it is polio because the disease rarely causes death.

The response to an appeal to counter the deadly cholera epidemic in Haiti has been blasted as shameful after the world body received only a quarter of the funding it needs.
Advertisement
<< Machines Threaten the Age-old Business of Mumbai's Washerme...
Fusion of Two Proteins can Trigger Cancer Growth >>