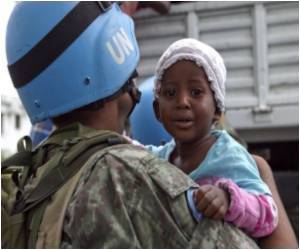 Women and girls who battled the odds during the earthquake in Haiti and survived, are now troubled by sexual violence and rape, according to Amnesty International.

More than one million people are still living in makeshift camps in the capital Port-au-Prince following the earthquake on January 11 last year, which left 230,000 people dead and another 300,000 injured.

Those responsible for the attacks are mainly armed men who roam the camps after dark, Sky News quoted the Amnesty report, as saying.


More than 250 cases of rape in several camps were reported in the first 150 days after January's earthquake and, one year on, rape victims continue to arrive at the office of a local women's support group almost every other day.

Almost a year on, women and children remain vulnerable

Some of the women were blindfolded and raped in front of their children by a gang of men who forced their way into their shelter.

Leona Lewis Auctions Herself Off to Raise Fund for Haiti Victims

Leona Lewis is auctioning off an afternoon in her company in a bid to raise money for Haiti earthquake victims.
Advertisement
<< Why Some Cancers Become Malignant?
Beware of death due to accident at age 40 >>

The WHO on Tuesday halted free drug deliveries to private hospitals and NGOs in quake-devastated Haiti following reports patients were being charged for treatment, a spokeswoman said.