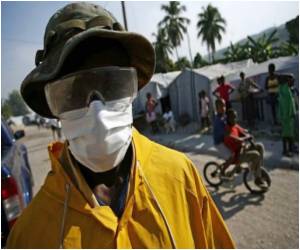 Haiti cholera outbreak that has claimed 3,651 lives has not peaked, the World Health Organisation said Tuesday.

"We think that the peak has not been reached," said Fadela Chaib, WHO spokeswoman, of the deadly disease that has also infected 171,304 people.

"The peak has not been reached because it would require the mortality rate to drop to less than one percent from 2.2 percent at the moment. That would take several weeks," she said.


"There will be certainly many more cases of cholera in Haiti, it's certain. But what is sure is that fewer people will die," added the spokeswoman, noting that the mortality rate had already been cut from nine percent late last year.

Waterborne diseases are communicable diseases caused by diseases causing microorganisms in contaminated water. It is more prevalent during floods and in tsunami affected areas.
Advertisement
Chaib also pointed out that in certain rural areas, more than 100 new cases of cholera were still being detected every day.

The spokeswoman said that the UN health agency had trained more than 500 health experts to deal with the cholera outbreak.

"We are continuing to mobilise experts to the most affected zones," she added, saying that "very significant challenges" remain in the impoverished Caribbean nation.

The epidemic, which began in October 2010, spawned deadly anti-UN riots in November as some turned their anger on peacekeepers from Nepal accused of bringing the disease into the country.

Women and girls who battled the odds during the earthquake in Haiti and survived, are now troubled by sexual violence and rape, according to Amnesty International.
Advertisement
<< Illegal Abortions in Thailand
Bottle Rockets Cause Eye Injuries in Children >>

The response to an appeal to counter the deadly cholera epidemic in Haiti has been blasted as shameful after the world body received only a quarter of the funding it needs.
Advertisement
News A-Z
A B C D E F G H I J K L M N O P Q R S T U V W X Y Z
What's New on Medindia