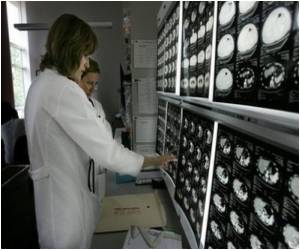 A new study has pointed out the manner in which two proteins fuse together to trigger growth of cancer.

Researchers at the University of Michigan Comprehensive Cancer Centre found that once the proteins API2 and MALT1 fuse together in a subset of lymphomas, they bind to an enzyme called NIK.

A new study has linked a common type of breast cancer in older women to a protein that fends off aging-related cellular damage.
Advertisement

NIK then splits into two, a process called cleavage, and consequently acts like a renegade protein, making cancer cells that grow, spread and resist traditional treatments.


The researchers, led by a husband and wife team, Linda McAllister-Lucas and Peter C. Lucas, coordinated an international effort that included contributions from laboratories in Great Britain and Belgium.

Women who are experiencing hot flushes and other symptoms of menopause are at lower risk of developing the most common forms of breast cancer, revealed in a new study.
Advertisement
The API2-MALT1 fusion protein appears 30 percent to 40 percent of the time in a type of B-cell lymphoma called mucosa-associated lymphoid tissue, or MALT, lymphoma. It's never seen in any other cells.

"NIK is a critical hub that's been implicated in other B-cell cancers. Cleavage of NIK by this fusion suggests a new way of activating NIK, and further supports that NIK represents a potential target for developing new therapies," said McAllister-Lucas.

The protein fusion itself is also a potential treatment target. Neither API2 nor MALT1 alone can cause a ripple effect on NIK. It happens only when the two fuse together, with API2 providing the access for MALT1 to cause the split. Without the fusion, NIK cleavage does not happen.

"A particularly exciting feature to this discovery is that the critical cancer-causing event involves a kinase - NIK - and a protease - API2-MALT1. Both kinases and proteases are considered druggable, meaning they are potential targets for developing drugs that block their activity," said Lucas.

MALT lymphomas that carry the API2-MALT1 fusion protein tend to be more aggressive and more resistant to treatment. The result is larger tumours and increased spread throughout the body.

The researchers found that once NIK becomes stable, it triggers a series of downstream reactions that make cells more likely to metastasise and more resistant to current treatments.

These effects were reversed when researchers turned off NIK, suggesting that either blocking NIK or preventing NIK from becoming stable by blocking the protein fusion, could halt the growth and spread of MALT lymphoma tumours.

The study is published in the current issue of Science.

How to Boost Broccoli's Cancer-Fighting Power

Convincing evidence that the way you prepare and consume your broccoli matters has been provided by a new University of Illinois study.
Advertisement
<< Haiti Health Authorities Investigate Cases of Sudden Deaths
EU Launches Legal Action to Put an End to Sweden's Wolf Hun... >>

Turmeric Powder - Health Benefits, Uses & Side Effects Find a Doctor Vent Forte (Theophylline) Sinopril (2mg) (Lacidipine) Daily Calorie Requirements Hearing Loss Calculator Diaphragmatic Hernia Noscaphene (Noscapine) Blood - Sugar Chart The Essence of Yoga
This site uses cookies to deliver our services.By using our site, you acknowledge that you have read and understand our Cookie Policy, Privacy Policy, and our Terms of Use  Ok, Got it. Close
×