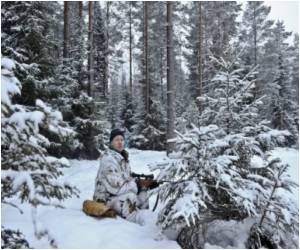 The European Commission has taken legal action against Sweden for permitting hunters to shoot 20 wolves despite knowing that they are an endangered species.

The European Union's executive arm raised concerns about Sweden's wolf policy, including the licensed hunting of a protected species and the "arbitrary ceiling" of 210 wolves that was set for the animal's population.

Are Men the Latest Endangered Species?

Well yes, insists a leading Aussie expert, who says men are much ahead in the queue of becoming extinct.
Advertisement

Sweden opened a hunting season on January 15 allowing hunters to kill 20 wolves. More than 6,700 hunters participated in the hunt, the commission said.


As of Wednesday -- 11 days after the hunt started -- 18 of the 20 wolves had been killed, the Swedish environmental protection agency said.

The hunt follows a 2009 decision by parliament to limit the wolf population to 210 animals, spread out in 20 packs, with 20 new pups per year, for a period of five years by issuing hunting permits in regions where wolves have recently reproduced.

Prime Minister Manmohan Singh Wednesday made a strong pitch to his fellow citizens to protect the environment and preserve wildlife, especially endangered species.
Advertisement
The Scandinavian country resumed wolf hunting last year when it set a quota of 27 wolves. It was the first wolf hunt since 1964.

After almost disappearing, wolves have reproduced in the last three decades with sheep and reindeer increasingly under attack.

The European Commission decided to open a formal infringement procedure, which can lead to a case before the European Court of Justice, which can impose hefty fines on EU states that violate the bloc's rules.

Swedish Environment Minister Andreas Carlgren on Thursday reacted to the Commission's announcement and said Sweden alone could decide whether or not to allow the country's wolf hunt.

"I am confident that we will be able to dispel the doubts that the Commission has on our wolf policy," he told reporters.

"It is our conviction that decisions on the predator policy should be foremost taken in Sweden, near the people concerned, not in Brussels," he and Agriculture Minister Eskil Andersson said in a statement.

Carlgren was holding a press conference to detail the next steps in the implementation of Sweden's 2009 wolf policy, which calls for the "genetic enhancement" of the country's largely inbred wolf population.

He said new wolves "of Eastern origin," including from Finland, would be introduced into the Swedish population this year.

The move could make way for a new hunt in 2012, Carlgren said, pointing out that the wolf population would be evaluated annually to determine whether a hunt was justified.

This year's hunt was heavily criticised in Sweden, with environmental groups saying it was cruel and lacked scientific grounds.

The Swedish Society for Nature Conservation said Thursday some 7,657 people had answered is call to protest by sending a letter to the EU environment commissioner through its website.

The organisation lauded the Commission's decision to launch a procedure against Sweden.

The Rajasthan forest department will draft a master plan for conservation of wildlife as well as make a list of all endangered flora and fauna to take up conservation actions.
Advertisement
<< Fusion of Two Proteins can Trigger Cancer Growth
Scientists Identify Potential Therapeutic Target for Improv... >>