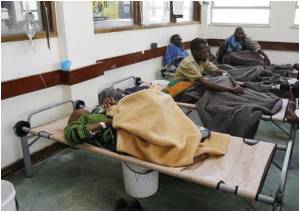 The response to an appeal to counter the deadly cholera epidemic in Haiti has been blasted as "shameful" after the world body received only a quarter of the funding it needs.

"Out of the 174 million dollars (131 million euros), the UN has only received 44 million or 25 percent of the funds we asked for, although (the situation) is of the utmost urgency," the spokeswoman for the UN Organisation for the Coordination of Humanitarian Affairs (OCHA), Elisabeth Byrs, told AFP.

"It's not moving. It's shameful that we should have so little money for an illness that currently kills in a flash because people don't have rehydration salts," she added.


Cholera can swiftly dehydrate patients without treatment for potentially deadly cases of diarrhoea.

The disease has left 3,333 people dead and infected 150,000 since it suddenly appeared in the quake and storm hit Caribbean nation last October, according to figures given by Haiti's health ministry last week.

Greenhouse effect causes excessive heat to build up in the earth's atmosphere causing global warming and affects the environment and health.
Advertisement
The Pan American Health Organisation warned in November that up to 400,000 people could fall ill with cholera in a year.

Last month the United Nations had received just 20 percent of the funds.

The OCHA asked donors for extra money to deal with cholera in November as health workers rushed to halt the fast spread of the disease, nine months after a devastating earthquake left 250,000 people dead and 1.9 million displaced.

Byrs insisted there was still a need for speed and underlined that cholera could easily be treated when patients received enough care.

The funding would also help to prevent waterways being contaminated and set up more treatment centres in rural areas.

By last month, donors had provided just over one billion of the 1.5 billion dollars the UN asked for in its separate, earlier, appeal for quake relief and reconstruction in Haiti, Byrs said.

In 2011, the world body will be seeking an additional 906 million dollars to help Haiti, this time including money to deal with cholera, she added.