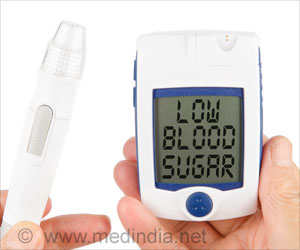 Frequent glucose monitoring may prevent hypoglycemia and death in hospitalized patients with stable coronary artery disease (CAD), shows new study. The results will be presented in a poster at ENDO 2018, the annual 100th meeting of the Endocrine Society in Chicago.

Advertisement
‘Monitoring blood glucose levels of heart disease patients admitted to the hospital could potentially save lives and decrease length of hospital stay and healthcare costs.’

"In hospitalized patients with coronary artery disease, hypoglycemia episodes are associated with increased hospital stay, healthcare expenses and death . . . In this study using national inpatient data, we found that those who had stable coronary artery disease and were admitted to the hospital for various reasons would have higher mortality if they developed low blood glucose levels during their hospital stay," he explained. "Interestingly, these effects were particular higher among patients without preexisting diabetes."


Fang and his colleagues at Mount Sinai used the National Inpatient Sample (NIS) database to conduct a nationwide retrospective cohort study of patients admitted to acute care hospitals in the United States with stable coronary artery disease in 2014.
Advertisement
Of the 1,262,943 patients admitted with stable coronary artery disease that year, about 3,000 (0.24 percent) had an episode of hypoglycemia during their inpatient stay. Compared to patients without hypoglycemia, those with hypoglycemia were more likely to be female (39 percent vs 47 percent, respectively), live in poverty (29 percent vs 34 percent), and have certain features of renal failure (27percent vs 32 percent) and heart failure (20 percent vs 27 percent). But they were less likely to have diabetes (10 percent vs 32 percent).

After adjustments for age, sex, race, income and clinical factors including diabetes, heart failure and kidney failure, the associations for mortality, length of stay and healthcare costs remained significant.

The Global Burden of Hospitalisation for Hypoglycaemia
Hospital admissions for a short-term and avoidable complication of diabetes have risen by 39 ......

Hospital Admissions With Hypoglycaemia Cases Increased by 39%
Most hypoglycaemic episodes are generally mild and can be self-treated by eating or drinking ......

New Smart Glucagon Delivery System
New glucagon delivery system predicts when a hypoglycemic episode is about to occur and sets off ......

Dextrose Gel Reduces Risk of Low Blood Sugar in Newborns
Nearly one in three infants is at risk for neonatal hypoglycaemia (low blood sugar levels), which .....