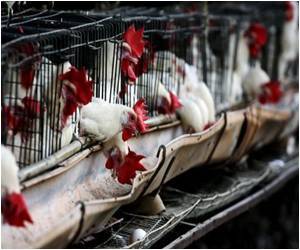 Since China announced over a week ago that H7N9 avian influenza had been found in humans for the first time, the number of people infected has risen to 24, almost half in the eastern city of Shanghai.

Chinese authorities say they do not know how the virus is spreading, though it is believed the infection is passing from birds to humans.


The World Health Organization (WHO) has said there is no evidence H7N9 is passing from person to person -- a development that has the potential to trigger a pandemic.
Advertisement
Authorities have advised the public to avoid live birds but offered reassurances that poultry and eggs that are still on sale are safe to eat if cooked properly.

However, state media said that poultry sales have plunged in some areas of China, even regions that have so far recorded no human infections.

"The impact is extremely big," she said.

In the northern city of Shijiazhuang, daily chicken sales have tumbled more than 50 percent from a week earlier at the city's largest agricultural market, the state-backed China News Service reported.

Shanghai has culled more than 111,000 birds, banned trading in live poultry and shut markets in a bid to curb the outbreak.

Domestic airlines, including budget carrier Spring and Xiamen Airlines, have yanked chicken from the menu after complaints from passengers, the Shanghai Daily newspaper said.

China has been hit by a series of food scandals in recent years, some caused by producers deliberately using sub-standard or illegal ingredients, making the public wary over what they consume.

The country was rocked by one of its biggest-ever food safety scandals in 2008, when the industrial chemical melamine was found to have been illegally added to dairy products, killing at least six and making 300,000 ill.

A decade ago, China also faced accusations it covered up the outbreak of Severe Acute Respiratory Syndrome (SARS), which killed about 800 people globally, but the WHO has praised Beijing's transparency for H7N9.

"The authorities seem to have learned the necessary lessons from the SARS outbreak," the China Daily newspaper said in an editorial on Tuesday.

As China battled the new strain, neighbouring Vietnam on Tuesday reported its first death in more than a year from the better known H5N1 bird flu strain. The latest victim was a four-year-old child from a farming family.

Last week Hanoi banned all Chinese poultry imports and stepped up border controls, including passenger temperature checks, in response to the new H7N9 strain in China.

Meanwhile Cambodia, which neighbours Vietnam, has also been hit with a recent unexplained spike in deaths from H5N1 which has killed eight people so far this year in the kingdom, including six children.

The H5N1 virus has killed more than 370 people around the world since a major outbreak in Asia a decade ago.

Analysts said the bird flu outbreak could hurt China's overall economy -- the world's second-largest -- though the effect was expected to be temporary.

"Past experiences told us that the negative impact from such epidemics won't last too long and ensuing pent-up demand could be quite strong, so there is no need for panic," China economist for Bank of America Merrill Lynch, Lu Ting, said in a report.