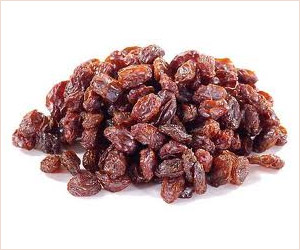 While acknowledged to be nutritionally and developmentally beneficial, even healthy food items can adversely affect a child's dental health and cause severe problems in later life. Dr. Saara Sabir, a practicing dentist, has suggested that the most serious culprit of tooth decay was raisins and dried fruit.

Dr. Sabir said, "Many parents think they're a good option because they're packed with vitamins, but the concentrated sugar content in dried fruit is extremely detrimental to a child's teeth. A small packet of raisins has around eight teaspoons worth of sugar in."

Tooth decay in toddlers, children and adults, also called dental caries, is a bacterial infection causing demineralization and destruction of the hard tissues of the teeth.
Advertisement
‘Many parents think raisins are a healthy snacks option because they are packed with vitamins. However, the concentrated sugar content in dried fruit is extremely detrimental to a child's teeth.’


Dr. Sabir further added, "The reason dried fruit poses a particular danger is also because of its consistency. Raisins are sticky and get stuck in teeth. Therefore the bacteria have a prolonged source of sugar, so it can cause decay for a longer period of time. Because of the nutritional value, it's better to give your child raisins as a dessert or part of a meal rather than a snack."

Practicing good oral hygiene regularly is a good investment not only for teeth but also for overall well-being.
Advertisement
<< Hearing Words Associated With High-Calorie Foods can Make On...
Sedentary Lifestyle During Pregnancy may Harm the Unborn Ba... >>

A toothache is a pain in or around a tooth that occurs due to various reasons that irritate the nerve supplied to tooth. Though Toothache is not life-threatening, it can get worse if left untreated.