Dieters can Lose Weight With Crowdsourcing 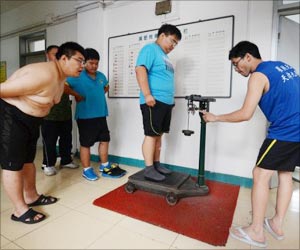 Dieters would be able to stick to healthy foods and lose weight with crowdsourcing, as participants are equally good as trained experts in rating the healthiness of foods and giving feedback on them, indicates research published online in the Journal of the American Medical Informatics Association.

Being able to track energy intake and getting personalized feedback on diet have been linked to greater weight loss, but can be hard to sustain over time, say the researchers.

The best way to lose weight and reverse disease could be to jump into a completely dairy-free, plant-based diet. This could be a revolutionary new way of eating for Indians.
Advertisement

But the advent of smartphone apps, with the facility to upload photos in real time, which can be easily accessed on the go, could be about to change that, they say.


They wanted to find out how well crowdsourcing, which relies on the input of several smartphone users to provide feedback and information, might help people stick to a healthy diet.

Fat is the culprit behind almost every lifestyle related disease or ailment. Losing excess fat is a way to ensure healthy and happy living.
Advertisement
They used 450 photos of food/drink uploaded onto the Eatery app by 333 unique users in Europe and the US.

This app enables users to rate their meals on a basic sliding 'healthiness' scale from 'fit' (healthy) to 'fat' (unhealthy), and to rate the photos of other app users in the same way, in a bid to help them improve the quality of their diet.

Three public health students, all of whom had completed course work in dietary assessment, were asked to rate the same pictures, using a more complex scale, based on a set of nutritional standards - the 2010 US Dietary Guidelines - with points deducted for unhealthy components and added for healthy ones.

The researchers say that their study represents the first step in assessing how reliable crowdsourcing might be for feedback on diet.

"Crowdsourcing has potential as a way to improve adherence to dietary self monitoring over a longer period of time," write the researchers.

"The results of this study found that when basic feedback on diet quality by peer raters is crowdsourced, it is comparable to feedback from expert raters, and that peers can rate both healthy and unhealthy foods in the expected direction," they conclude.

Foods to Help You Lose Weight

Fad diet, tried them all but did not get the expected results? Here's why. Developing healthier eating habits will not only help you lose weight, but help you ward off inflammation.
Advertisement
Advertisement

Confused between different diet plans? Grab these amazing foods to cut the belly fat. Read on

Hypnosis indirectly helps with weight loss by altering the consciousness through suggestions and imagery to a ...