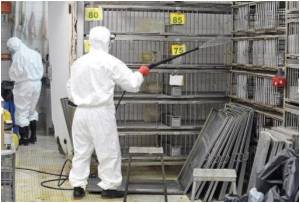 Concern rages over the mutated bird flu research. Already the World Health Organization (WHO) has issued a stern warning that the engineering of the deadly bird flu virus in the laboratory carries significant risks and must be tightly controlled.

The WHO said such research should be done "only after all important public health risks and benefits have been identified" and "it is certain that the necessary protections to minimize the potential for negative consequences are in place."

Scientists working separately at the University of Wisconsin at Madison and at Erasmus Medical Center in Rotterdam in the Netherlands have produced a genetically altered strain of the virus that is highly contagious among people.


The agency also said it was vital that new rules on the sharing of viruses and scientific know-how were enforced to ensure those countries at most immediate risk from H5N1, mainly developing countries in Asia such as Indonesia, Vietnam and others, would benefit from advances in research.

Allegations on the United States censoring science in an attempt to limit likely dangerous bird flu information in key journals has been rejected by top US health official Anthony Fauci on Wednesday.
Advertisement
H5N1 bird flu is extremely deadly in people who are directly exposed to it from infected birds.

Since 1997, about 600 people have become sick with H5N1 influenza, which is found in poultry. Most of the cases have occurred in Southeast Asia, where 50 percent to 60 percent of those sickened have died. The Spanish flu pandemic that killed some 40 million people in 1918-1919 had a mortality rate of about 2.5 percent.

H5N1 is neither easily acquired by humans nor easily passed from one to another. Circulating seasonal strains, such as H3N2, are adept at attaching to the human nasal cavity and trachea, making them easily transferable among people via a sneeze, cough or sigh. But H5N1, as it has circulated in bird populations, has not yet developed this capability.

Catching it requires close contact with infected fowl; it cannot be transmitted via airborne mucus like ordinary flu. If it could, H5N1 could decimate human populations.

To avoid that, the National Institute for Allergy and Infectious Diseases funded research projects at universities in Wisconsin and in the Netherlands. The goal: Test how susceptible H5N1 was to genetic mutations that might give it airborne capability among mammals. Ominously, both projects produced just such mutated strains.

"We mutated the hell out of H5N1," said Ron Fouchier, a virologist from the Erasmus Medical Center in Rotterdam addressing the European Scientific Working group on Influenza meeting at Malta in September last.

The research itself is turning into one hell of a scare. U.S. security advisers fear that publishing details of the research could give potential attackers the know-how to make a bioterror weapon.

The U.S. National Science Advisory Board for Biosecurity has asked two journals that want to publish the work to make only redacted versions of studies available.

The advisory board's 23 voting members  all academic scientists and public health officials  spent weeks studying the research papers. They knew public health workers could use the information in the papers to identify a mutated strain early and quickly move to contain it. Other researchers could use it to work on a vaccine and better treatments.

But what if terrorists adapted the information?

Since its creation in 2004, the board never had asked scientific journals to delete material prior to publication. But this time, it voted unanimously to do so.

The chair of the National Science Advisory Board for Biosecurity, Paul Keim, told AFP that even though the research has already been discussed by Dutch scientists at public forums, all 23 members voted unanimously to urge editors to withhold the data in case it fell into the wrong hands.

Science and Nature will honor the board's request.

Keim also said the new virus strain was scarier than anthrax: "I can't think of another pathogenic organism that is as scary as this one."

Even if bioterrorists or rogue nations never glean the secrets of making the virus, the possibility remains that bird flu will mutate in the real world, and we could face a Hollywood-sized pandemic, writes Katherine Harmon of the Scientific American, a leading journal.

Scientists and officials now are arguing over whether the research was necessary at all and whether  now that the information exists  Pandora's box can be sealed at all.