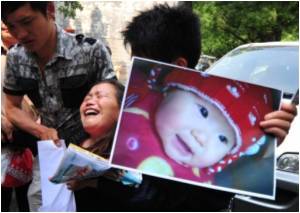 Chinese state media reported on Sunday that the health ministry, through an investigation, found no evidence that milk powder produced by a Chinese company caused three infant girls to grow breasts.

The findings of the clinical investigation were announced by the health ministry in Bejing, the official Xinhua news agency and Wangyi news website said.

Authorities in the central province of Hubei had been ordered to investigate baby formula after parents and doctors expressed fears that hormones in the powder made by NASDAQ-listed Synutra had caused babies to develop breasts prematurely.


Local food safety authorities had earlier refused a parent's request to investigate the formula made by Synutra, based in the eastern city of Qingdao, saying they did not conduct tests at consumers' behest, state media reported.
Advertisement
Medical tests indicated the levels of hormones in three girls, ranging in age from four- to 15-months and who were fed the same baby formula, exceeded those of the average adult woman, the China Daily reported last week.

A fourth case was reported in Beijing, Xinhua reported on Tuesday.

The ministry said previously that medical experts were also assisting a separate medical investigation into the cause of the infants' condition.

Synutra insisted in a statement that its products were safe and that no man-made hormones or illegal substances had been added during production.

Hormones in China Milk Powder Blamed for 'Baby Breasts'
Parents and doctors in central China fear that hormones in milk powder they fed their infant ......

Nearly 53,000 Chinese Babies Sickened Over Tainted Milk Powder
Nearly 53,000 children in China have been sickened by milk powder contaminated by an industrial ......