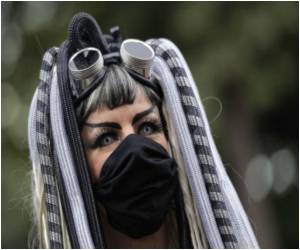 Organizers said that some 800,000 people joined in Zurich's techno Street Parade on Saturday even as city police mobilised to monitor the crowd after the deadly techno event in Germany last month.

Fans started marching early afternoon (1200 GMT) to the beat of booming electronic music, following some 30 floats through the streets of Switzerland's economic capital.

Paris celebrated its tenth annual Techno Parade Saturday with the cream of European disc-jockeys blasting out tunes for tens of thousands of revellers on the streets.
Advertisement

City police told AFP by early evening that the event was generally calm even though there were "many cases of people drunk or under the influence of drugs."


Two people suffered head injuries and had to be hospitalised, police said.

Authorities were concerned about the techno event after panic broke out in the tunnel entrance to the Love Parade in Duisbourg, Germany, on July 24 causing a stampede that left 21 people dead and more than 500 injured.

A word of caution for iPod users to avoid listening to music while driving.
Advertisement
The marchers in Zurich's parade, some dressed as Superman and Hello Kitty or in goth style, gathered on the banks of Zurich's lake and observed a minute of silence to remember the victims of the German techno party.

Around the lake there were seven stages where DJs presented concerts and the crowds danced to the music.

The Street Parade is considered the world's biggest techno-party, which has taken place each year in Zurich since 1992.

A study by the University of Wales researchers has found that listening to music distracts the mind from the task at hand.
Advertisement
<< Chinese Investigators Find No Evidence to Prove Milk Powder...
Half of All US Women Would Rather Give Up Sex to Lose Weigh... >>

Homework While Listening to Music can Impair Academic Performance

Doing math sums while listening to your favourite songs may not help you focus better - in fact it could cut down your performance in the exam.
Advertisement
News A-Z
A B C D E F G H I J K L M N O P Q R S T U V W X Y Z
What's New on Medindia