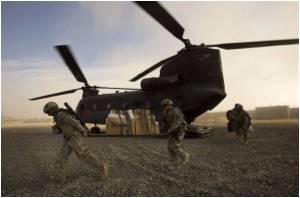 Scottish scientists are developing a new chemical bandage that aids in saving lives on the battlefield by instantly helps in blood clotting and staunch wounds.

The authors have discovered a group of polymers - molecules used in the manufacture of plastics - that accelerate the crucial clotting properties of platelets in blood, reports the Scotsman.

Nanoparticle-Containing 'Self Medicating' Bandage Can Detect and Treat Infection

A 'self medicating' bandage laced with nanoparticles can detect harmful bacteria in a burn wound and respond by secreting antibiotics.
Advertisement

The polymers could have significant use in battlefield conditions as they can be sprayed on to bandages and applied directly to an injury to instantly begin the coagulation process, say researchers at Edinburgh University.


The research team was led by Mark Bradley, Professor of High-Throughput Chemical Biology, and Anne Hansen at the university's Chemical Sciences school.

Wasted Muscle Due to DMD can Be Renewed With RNA 'Bandage'

For the first time, an RNA 'bandage', which shields genetic mutations, could trigger the production of a missing, muscle-strengthening protein in boys with Duchenne muscular
Advertisement
The problem of treating battlefield wounds remains a major challenge with "bleeding out" - the loss of too much blood to sustain pressure and heartbeat - one of the major causes of death after injury.

The polymers could also have a much wider use in civilian life if incorporated into the sticking plasters commonly used to stop blood flow from cuts and other injuries.

Not only do they speed up the clotting process, they are also believed to prolong how long clots last.

An advance towards the development of an anti-thrombotic drug by discovering a way to harness the enzyme thrombin's anti-blood clotting properties has been made by molecular biologists.
Advertisement
<< Military's Culinary Revolution
China Expecting a Breakthrough in Stem Cell Research >>

Cheap Blood-clotting Drug Could Save 100,000 Lives Each Year

An easy-to-use blood-clotting drug that costs just a few dollars could save up to 100,000 lives each year from road accidents and violence, according to a paper published on Tuesday by The Lancet.
Advertisement
News A-Z
A B C D E F G H I J K L M N O P Q R S T U V W X Y Z
What's New on Medindia