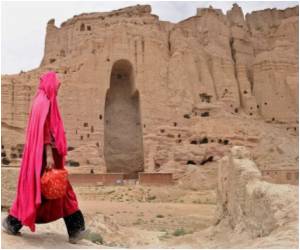 In a gym at Kabul's main stadium, where the Taliban used to publicly execute women accused of adultery, female Afghan boxers hoping to make it to the London 2012 Olympics are practising their jabs.

Some wearing headscarves, all in tracksuits, the slightly built young women pummel four heavy old punchbags hard, moving fast and light on their feet while their male trainer barks instructions.

The women are among a small number in Afghanistan training hard across a range of sports in the hope of being able to bring some pride to their war-torn country at next year's Olympic Games.


Men walking past the gym look in with lingering curiosity, highlighting how unusual it is for women to take part in such a violent sport in a conservative, religious state like Afghanistan.

Muslim Women Barred from US Skating Rink for Sporting Headscarves

A complaint has been filed against a roller-skating rink in Vernon after two Muslim women were barred from entering the rink because they were wearing headscarves.
Advertisement
Under the Taliban, who were ousted from government in 2001, all sport for women was banned, and it is still extremely rare for them to participate in rural areas. Even in cities, many sports for girls are at a fledgling stage.

But the sportswomen say they have the support of their families.

One boxer, 17-year-old Shafika, says her mother had encouraged her to take up the sport.

"When I started boxing I felt myself free and comfortable and happy," she says. "In the name of Afghanistan, we should have some women boxing and get some medals.

"We want the Afghan flag to come up at all the medal ceremonies for women boxing."

Still sweating after a vigorous session, one of the best prospects, 18-year-old Shabnam Rahimi, explains her love of boxing -- and says the idea of performing in the sporting world's biggest arena does not scare her.

"When I was 11, I saw boxing on TV, I followed it and now for four years I have been coming to training," she says.

"Some of the women say it is very bad for the face to be a boxer. I was worried because of my face but I'm not scared any more. I'm feeling strong and I can fight for myself."

The female boxers have some distance to go before they make it to the Olympics, though.

Trainer Mohammad Saber Sharifi says that the women must pass a pre-qualifying stage before they can join the games, which begin in July next year.

"I hope we send one or two to the Olympics," he says. "Boxing is very difficult and we have time to grow and improve. It takes time. The girls are growing and we hope for the future we have a good team."

In total, Afghanistan's Olympic committee is hoping to send around six women to the 2012 Olympics to represent Afghanistan, including in boxing, judo and taekwondo.

No Afghan woman has ever won a medal at the games, and only one man has -- taekwondo star Rohullah Nikpai -- making him a hero in his homeland.

Organisations which support female boxing in Afghanistan say its impact goes beyond only sporting success.

"Not only are they doing something they enjoy but they are challenging perceptions of Afghan women," says Louise Hancock, a Kabul-based spokeswoman for Oxfam, which supports the boxers through local NGO Co-operation for Peace and Unity (CPAU).

"The reality is that Afghan women are now doing things few thought possible ten years ago."

The proposal requires foreign men wishing to wed Muslim women to put a guarantee of 500 million rupiah
Advertisement
Advertisement
This site uses cookies to deliver our services.By using our site, you acknowledge that you have read and understand our Cookie Policy, Privacy Policy, and our Terms of Use  Ok, Got it. Close
×