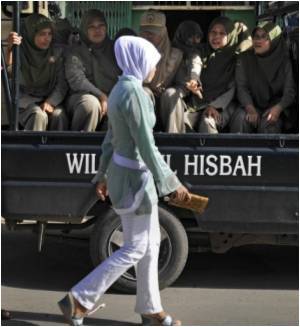 Alarm bells not wedding bells are ringing over Indonesian proposals to demand a 55,000-dollar "security guarantee" from foreign men who marry Indonesian women.

Enraged brides-to-be are threatening to flee the country and marry their boyfriends abroad if the government approves the plan, which is part of a wider marriage law reform being pushed by Muslim conservatives.

Ardi Rizal, an Indonesian boy, is hooked on cigarettes at the tender age of two.
Advertisement

And befuddled foreign grooms are asking why they are being targeted when stories of foreign men being exploited by gold-digging women are rife in the Southeast Asian country.


The proposal requires foreign men wishing to wed Muslim women -- it will not apply to Christians or Buddhists or Hindus -- to put a guarantee of 500 million rupiah (55,000 dollars) into a bank.

Indonesia's Constitutional Court ruled Thursday that traditional costumes and dances cannot be criminalised under a controversial pornography law.
Advertisement
If the couple divorce, the wife will be entitled to take the money. If they stick together for at least 10 years, they can claim it as "shared property".

"The provision... is intended to protect the rights of women and their children if their husbands neglect, fail to provide for, leave Indonesia secretly... divorce or do anything which harms their interests," the bill says.

"How ridiculous... the government wants to sell me off," sniffed 36-year-old events organiser Roslina, who is planning to tie the knot with her German boyfriend, Christopher, in September.

"My future husband will pay the amount but that's not the point. We'll definitely marry abroad if this becomes law."

A 24-year-old model who declined to be named said she and her boyfriend, also from Germany, were being unfairly discriminated against.

"It looks like the government has no respect for Indonesian women. It's crazy to penalise only foreign men. Why not charge local men who marry three or four wives but can't afford it?" she said.

Her 39-year-old boyfriend, a banker who declined to give his name, said: "It's a clear statement by the government that it owns its people and it sells them on the meat market."

"Maybe we'll also see catalogues in the future of women who are on the market for sale. Maybe I can open an office abroad and start marketing Indonesian women," he added sarcastically.

Female student Masyita agreed: "People say that love is priceless, but you have to pay a penalty if you fall in love in Indonesia. But don't worry, it's only 500 million rupiah... so cheap, aren't we?"

The proposal, spearheaded by the religious affairs ministry, will be sent to parliament for approval by the end of the year, an official said.

The guarantee is designed to stop foreigners entering fake marriages in order to set up businesses or buy property in their wives' names, and to ensure that women are financially secured against divorce, ministry official Nasaruddin Umar said.

"When the women are no longer of use, it's usually goodbye to them," he added without providing figures or research to back up his statement.

"Marriage is pure and sacred, it shouldn't be tainted by lust or personal interests. We want to protect our women."

The plan has drawn mixed responses from the country's clerics, women's groups and lawmakers.

Clerics in the world's most populous Muslim-majority country have thrown their weight behind the draft bill.

Critics say it will only encourage people to "live in sin" outside of wedlock, leaving women more vulnerable.

"I applaud this proposal. We've heard many cases of foreigners marrying our women and then deserting them and their kids with nothing," Indonesian Council of Ulema chairman Amidhan told AFP.

But lawmaker Iskan Qolba Lubis said: "People want to marry because they're in love so why are we making things difficult for them? It's also discriminatory. We wouldn't be happy if other countries did the same to us."

Nia Schumacher of Melati Worldwide, a group which lobbies for the interests of people in mixed marriages, said the proposal would lead to an exodus of "runaway brides".

"Or the couples may not register their marriages or skip marriage altogether and co-habit instead. Is that what the government wants?" she asked.

Some women's rights activists say the plan treats women like a commodity and discriminates against foreign men.

"We clearly reject the proposal. It lowers the dignity of women and not all foreign men have that much money," Association of Indonesian Women in Multinational Marriages (Srikandi) co-chairwoman Emmylia Hannig said.

"If the basis of the law is to protect women, it should apply to both foreign and local men. There are many cases of local men having several wives and ditching them without giving money," she added.

Roslina said the bill was ruining romances as foreign men walked away from promises.

"My friend has lost a potential husband. She and her French boyfriend had been dating for four years and were planning to get married. But I heard the wedding has been postponed indefinitely," she said.

"The man said he's scared to get married because it's unfair that he needs to pay."

Islamists in Indonesia Block Horror-Comedy Movie About a 'Menstruating Ghost'

Indonesian film producers said Friday they had withdrawn a horror-comedy movie about a menstruating ghost from cinemas due to threats from hardline Muslims.
Advertisement
Advertisement