For those who wish to have a great-looking nose, a rhinoplasty, also called a "nose job" in common parlance, is the answer. This surgery falls under the realms of plastic surgery or cosmetic surgery.

A rhinoplasty can render the nose not only to be better looking but also in harmonious proportion with the rest of the face. It can be carried out on noses that are too long or too short, flat noses, broad noses, noses that have been deformed after injury or surgery or are causing difficulty breathing.

The operation can be done under local anesthesia or general anesthesia. Getting some laboratory tests and ceassation of smoking are mandatory before the operation. 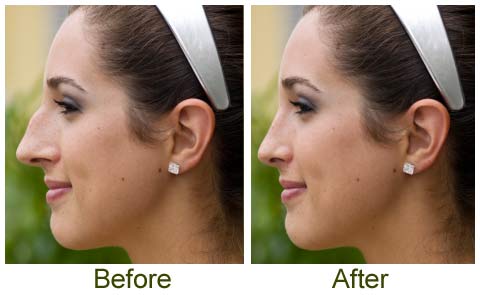 An opening is made within the nose, as in the 'closed rhinoplasty' or outside in the portion between the two nostrils as in the 'open rhinoplasty'. The surgeon then works on the soft tissue and cartilage or bone. If necessary, cartilage or bone grafts (taken from elsewhere in the body) is used to reshape the nose. If the septum or partition that divides the nose is deviated, or crooked, it can be aligned into the mid-position. Splints may be used to retain the newly-aligned grafts in its position. Then the opening in the skin is closed.

One can expect bleeding, pain, loss of sensation or bruising of the skin over the nose for some time. If the cavity within the nose has been excessively narrowed or the septum has been perforated, the operation may have to be re-done at a later stage, which is then called a secondary rhinoplasty. The healing process over, one can expect the new-look nose in about a year's time. However, caution must be exercised in order not to stress or strain the incision lines.

The nose defines one character whether nosy, snobbish, crooked, or regal. But if you wish to change the way the world perceives you (your nose), go for a nose-job today.

Plastic Surgery and Procedures
Plastic surgery is often portrayed as a branch of medicine that caters to our vanity, but it has a lot more to offer. Plastic surgery procedures are vital to numerous medical treatments today.

septoplasty - Animation
Flash illustration to explain the correction of a deviated nasal septum by a simple surgical procedure called Septoplasty.

Rhinoplasty
Want a Roman nose? Travel abroad and explore the option of having surgery done at affordable prices.

I had nose plastic surgery as I was embarrassed about the appearance of my nose. So happy with the results.

I would really like to get a nose job and whichever Doctor did this ladies nose, did an amazing job. It is very difficult to choose a good doctor but I must say, when I look at pictures like these, it is very encouraging. Excellent job!