Pneumonectomy is a surgical procedure in which the entire lung is removed. It is an open-chest technique, which is usually done for lung cancer cases that cannot be treated by removal of a small portion of the lung. 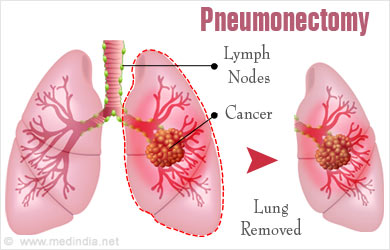 Who Undergoes Pneumonectomy?Pneumonectomy may be used for patients with the following conditions:

What are the Types of Pneumonectomy?

Types of pneumonectomy include the following:

Standard pneumonectomy: In this procedure the affected lung i.e., either the left or right lung is removed.

Extrapleural pneumonectomy: This type of surgery is most often done to treat mesothelioma, which is a kind of cancer that begins in the lining surrounding the lungs, called pleura. The surgical procedure involves removing the left or right lung along with portions of the diaphragm, pericardium (the membrane lining the heart) and the pleura.

Completion pneumonectomy: This type of surgery is done to remove a lung whose part was already removed surgically earlier.

What are the Other Types of Surgery for Lung Cancer?

In several cases of lung cancer, the entire lung does not require to be removed. A limited surgery may be carried out in such cases. Examples of such limited surgeries are:

Lobectomy: This is the most common type of surgery for lung cancer. It involves removal of a lobe of the affected lung (If two lobes are removed, the procedure is called bilobectomy). Your doctor will recommend this type of operation if he/she thinks that the cancer is limited just to the lobe of one lung. 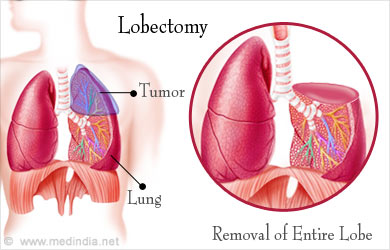 Sleeve Resection: This procedure may be done for cancers located in the central area of the lung and spreading into a bronchus. In this procedure, the affected section of the bronchus and any surrounding cancer in the lobe is surgically removed.

Video-Assisted Thoracoscopic Surgery (VATS): This is a type of keyhole surgery to remove very early small cell lung cancers. The doctor makes a small cut in the chest region and inserts a flexible tube with a telescopic camera in order to examine the lungs. Few incisions are then made in the chest and the surgical tools are inserted through them to carry out the surgery.

Wedge Resection and Segmentectomy: Wedge resection removes a wedge-shaped area of the lung that includes part of one or more lobes, while a segmentectomy involves removal of a segment of the lung.

These surgeries are used when the cancer is detected early and has not spread to other regions.

What are the Tests Recommended before Pneumonectomy?

Tests recommended before pneumonectomy include: 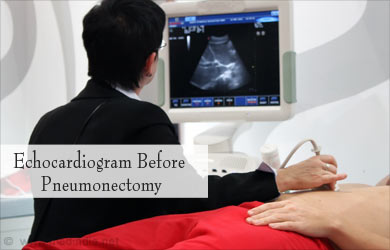 How to Prepare for Pneumonectomy?

How is Pneumonectomy done?

What are the Potential Complications of Pneumonectomy?

Pneumonectomy complications are not uncommon since it a major medical procedure. The incidence of complications is reported to be as high as 20-60%. Your doctor will inform you about them before your surgery. Here are few potential complications experienced by the patient: 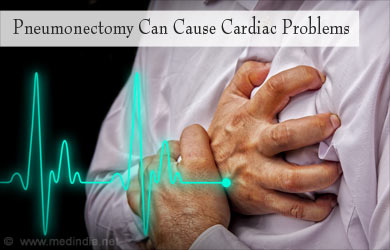