What is Liberal or Restrictive Transfusion after Cardiac Surgery?

Cardiac surgery is often necessary in the treatment of coronary heart disease, with procedures like angioplasty and bypass surgery being routinely performed. These kinds of heart surgery procedures are often used to provide patients with relief from chest pain to reduce the risk of a heart attack or heart failure. Such procedures also help to minimize the risk of damage to the heart that could result from narrowing or blockage of the arteries.

Heart surgery, like most surgical procedures comes with its fair share of risks, with bleeding and blood loss being the main concern. This can result in a reduction in the flow of oxygen carrying red blood cells, a condition known as anemia. Anemia is a big concern for health care providers because it associated with an increased risk of complications after surgery, including a higher fatality rate. In patients suffering from anemia there is a reduced supply of oxygen in the blood and hence to the tissues and the cells it serves. The condition may develop not just on account of blood loss from surgery but could also be present because of a dietary deficiency of iron or Vitamin such as B6 or B12, because of the poor absorption of iron or due to deficiency of vitamins from food sources. 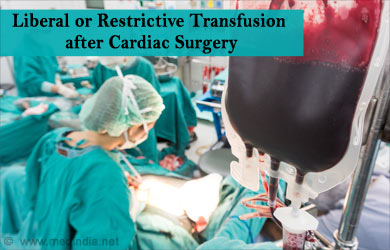 Because of the impact of anemia on patient outcomes following heart surgery, anemia needs to be closely monitored and keeping this in mind, hemoglobin or hematocrit levels are monitored even during the surgery. If doctors find that a patient is becoming too anemic they may decide to use a blood transfusion. Unfortunately, there has been a lot of debate and differences of opinion not just with regard to the association of poor patient outcome and increased mortality with anemia, but also with regard to the efficacy of blood transfusions in such a scenario.

What is Liberal or Restrictive Transfusion?

Researchers have been conducting studies to verify claims made by proponents of both approaches. In a recent study conducted by researchers at the University of Bristol, which also included academics from the University of Oxford, two groups of cardiac surgery patients were observed, with over 2000 participants. The researchers conducted a randomized controlled trial in order to compare the effects of the divergent practices of transfusion for cardiac surgery patients. The study aimed to find out whether administering a blood transfusion at lower levels of hemoglobin makes sense for reasons of safety and cost efficiency, as most studies so far seem to suggest.

Patients were treated using the two transfusion strategies and data was then compared on post-surgical complications like serious infection, stroke, heart attack, dead gut or kidney failure within three months of the surgery. What they found contradicts many of the claims being made this far. The researchers found that patients that were on the restrictive transfusion policy did not fare much better than their counterparts and the number of patients suffering from severe complications was in fact marginally higher. Overall however, the researchers found that there was not much difference between the recoveries in both groups. Interestingly, they also found that there was little difference in health care costs between the two groups. Mortalities were also slightly lower in the liberal transfusion group. 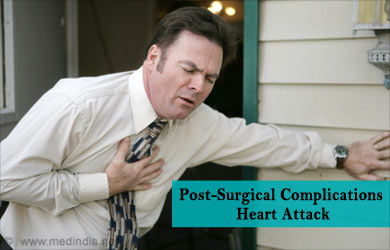 The findings of this study are especially significant, considering the size of the trial group which was four times greater than any of the other test groups in previous studies. If these findings are supported by further studies it would mean that liberal transfusion for cardiac surgery patients is the more viable strategy because of the improved patient outcome and survival rates.

Post-heart Surgery, Pneumonia is Most Common Serious Infection
For the first time research has shown that pneumonia is the most common serious infection after heart surgery, new research from the Perelman School of Medicine at the University of Pennsylvania.

New Alternative to Open Heart Surgery-Revealed
In this era of medical innovations and breakthroughs, a new alternative to open heart surgery has emerged, widening horizons and creating new hopes for millions suffering from heart disease.