What is Hiatus Hernia?

Hiatus hernia or hiatal hernia is a condition where the upper part of the stomach protrudes into the chest cavity through an opening (hiatus) in the diaphragm.

The diaphragm is a sheet of muscle that separates the lungs or the chest cavity from the abdomen. The left diaphragm contains the hiatus in concern here (esophageal hiatus) through which passes the tube-shaped esophagus that carries food and liquid to the stomach. Normally this hiatus is small and fits snugly around the esophagus. The J-shaped stomach sits below the diaphragm.

The diaphragm also prevents the acid from the stomach from getting into the esophagus. When hiatus hernia occurs, and the stomach protrudes upwards, the acid is reflexed up into the esophagus. This can result in a painful burning sensation unlike the other hernias which often appear without symptoms. Hiatus hernia is fairly common and occurs in about 10 per cent of people.

What are the Types of Hiatus Hernias?

Type 2: Also known as para-esophageal or rolling hiatal hernia, it accounts only for 5% of all hiatal hernias but causes the most complications. The gastroesophageal junction remains in its place below the diaphragm while the stomach rotates itself and herniates into the chest cavity next to the esophagus.

If more than 30% of the stomach goes into the chest cavity, it is called a giant para-esophageal hernia.

Type 3: Majority of the para-esophageal hernias belong to this type where the gastroesophageal junction is herniated above the diaphragm and the stomach herniates next the esophagus. Hence, it is a combination of type 1 and type 2.

Type 4: Other organs like the colon, small intestine, pancreas and spleen also herniate into the chest cavity along with the stomach.

The end stage of hiatal herniation involves total herniation of the stomach into the chest by rotating 1800. This is referred to as intrathoracic stomach.

What are the Causes and Risk Factors of Hiatus Hernia?

The cause of hiatus hernia is not known. The result of a weakening of the supporting tissue around the opening can lead to this condition.

Hiatus hernias are very common, especially in people over 50 years old. This can lead to the reflux of gastric acid from the stomach into the esophagus. Children can have this condition from birth.

Obesity and smoking may be the risk factors in adults. 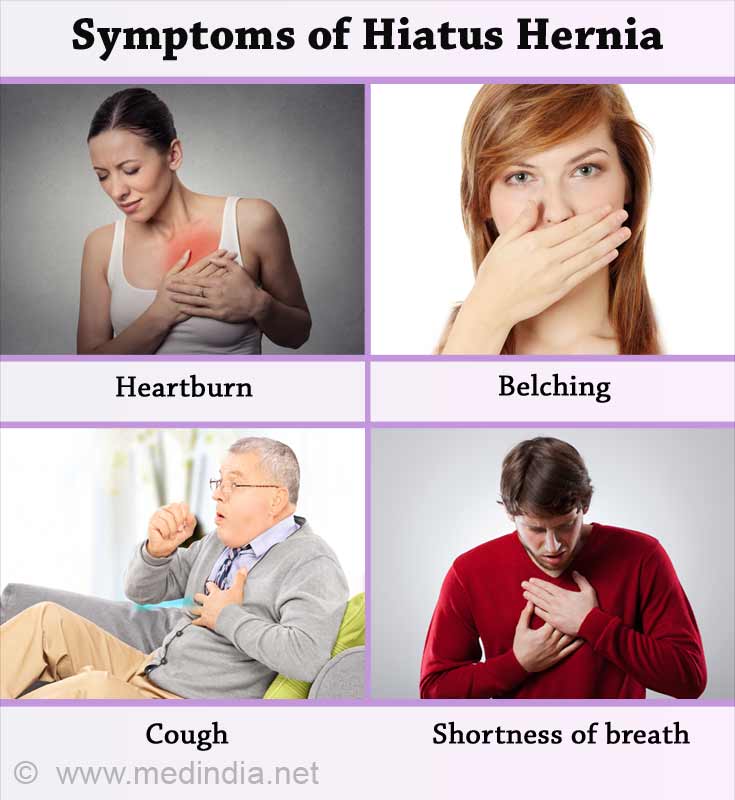 Possible causes for hiatus hernia could be:

What are the Symptoms of Hiatus Hernia?

Usually, most people are not troubled by their hiatus hernia. But if reflux of the acid contents of the stomach occurs (called gastro-esophageal reflux), heartburn is experienced and it is a painful burning sensation in the chest, which can sometimes be felt in the throat. This can bring the acid fluid into the mouth, especially, when you lie down or bend forward. These symptoms are a problem when you go to bed and can wake you up.

Newborns can have a congenital opening in the diaphragm with symptoms of fast or difficult breathing and increased heart rate. 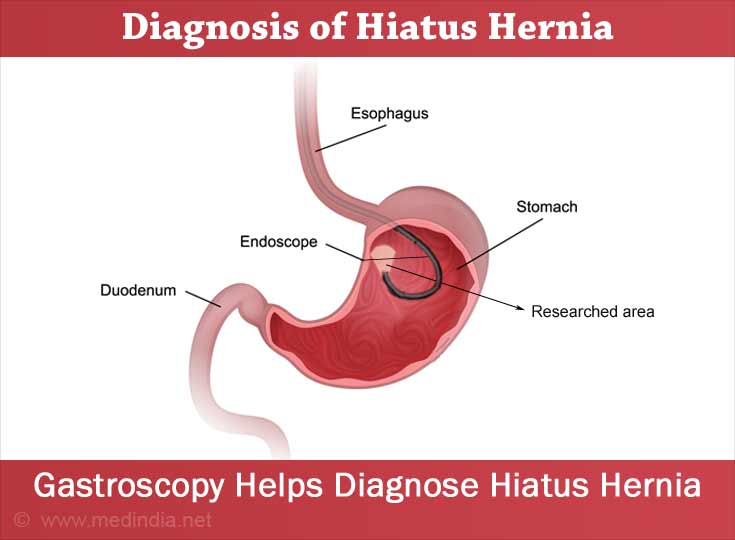 What are the Complications of Hiatus Hernia?

It is important to distinguish between the symptomatic and complicated hiatal hernia. This is essential because surgery is very often indicated in the latter group.

What is the Diagnosis for Hiatus Hernia?

Hiatus hernia is discovered when the patient complains of acid reflux or upper abdominal pain. The diagnosis is confirmed by - 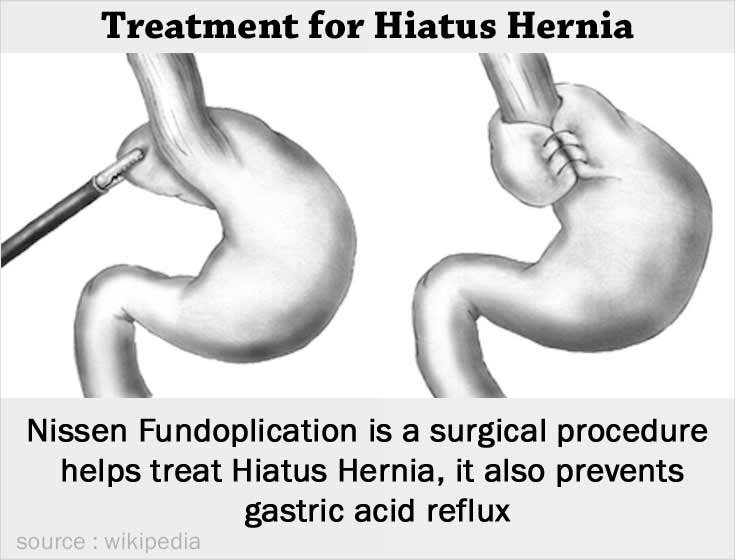 What is the Treatment for Hiatus Hernia?

If no symptoms like pain or discomfort are present, no treatment is required. When there is pain or discomfort at night due to acid reflux, patients should keep their head raised in bed and avoid lying down immediately after eating. If the cause is being overweight, weight loss is indicated.

Medications that strengthen the lower esophageal sphincter should be avoided. Medicines help to reduce the entry of stomach contents into the esophagus (gastro esophageal reflux). Examples are:

When the hiatal hernia is huge or when it is of the para-esophageal type, the esophagus gets narrowed or tightened and swallowing becomes difficult. This might cause chronic acid reflux and the cells in the walls of the esophagus could get damaged. Surgery is then advised. In para-esophageal hernia it is the first-line procedure. Any hernia with unrelenting symptoms or complications is an indication for surgical repair. The types of surgery include

The most common surgical procedure is Nissen fundoplication. In this procedure, the upper part of the stomach is wrapped around the lower part of the esophagus and secured with a mesh so the stomach does not herniate upwards. This also reinforces the closing of the lower esophageal sphincter so that gastric acid reflux is prevented. 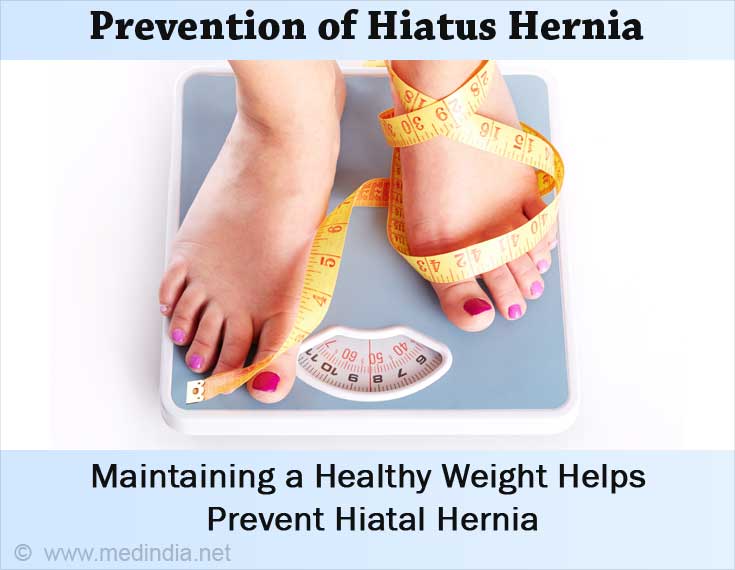 It can be performed laparoscopically in which case there are lower complication rates, quicker recoveries, and relatively good long term results.

In the open repair surgery, a single large surgical cut is done on the belly and a tube is inserted into the stomach. The tube is removed a week after the surgery.

In the laparoscopic repair surgery, 3 to 5 small cuts are made on the belly through which a tiny tube with a camera at the end and other surgical tubes are inserted. The surgeon does the procedure while looking at the inside of the belly with a video monitor that is connected o the laparoscope.

In endoluminal fundoplication, no incisions are made. An endoscope with a camera is sent down though the mouth into the esophagus. Small clips are put in place at the gastroesophageal junction to prevent food and stomach acid from refluxing.

Surgery could sometimes be dangerous, so watchful waiting may be advised.

Post-operative complications in surgery could include -

Using synthetic meshes in this procedure causes infections and erosions. According to a new study, surgeons can perform laparoscopic fundoplication using a new biologically derived material instead of the synthetic mesh reinforcements. They are durable for 3 years post operation.

How do you Prevent Hiatus Hernia? 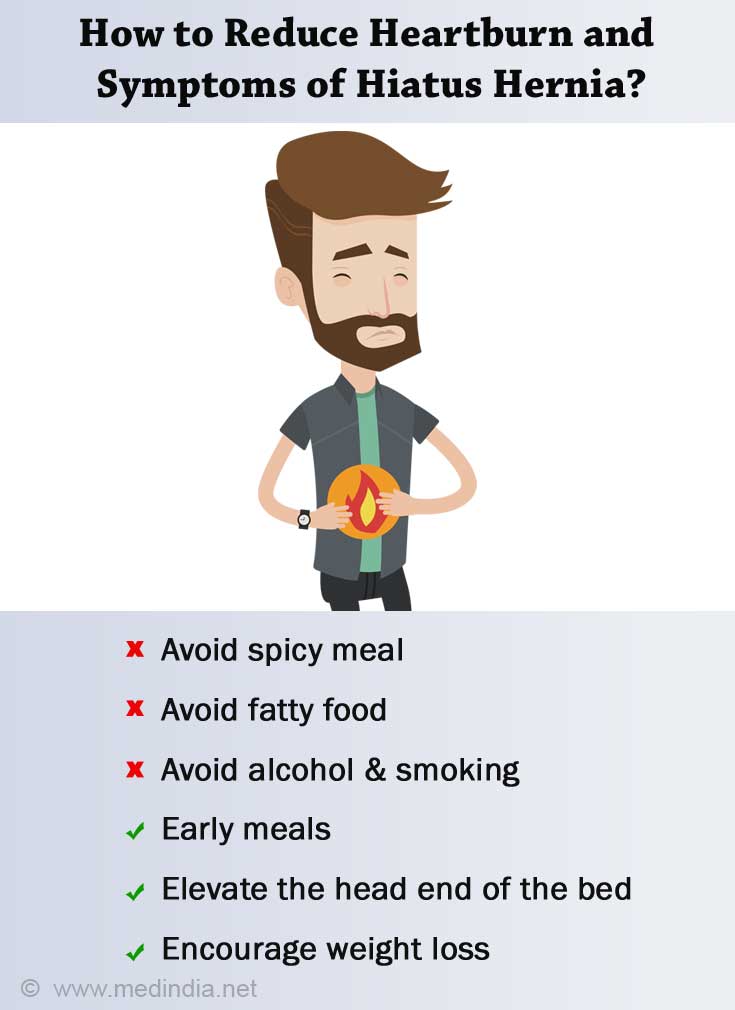 The link to the main site is: GERD diet Ian

hiatushernia is uncurable what are the precaution we need to take and please tell me is it is dangerous?

is haitus hernia a congenital condition ? If not then what is the cause of it

Digestive System Digestion, is a process when food particles are broken down into simpler molecules then absorbed into the cells of the body. Know about the interesting fact of the anatomy of the digestive system.

Inguinal Hernia Surgery - Animation Animation explaining the inguinal hernia surgical procedure. In this procedure, the hernia is reduced and the inguinal wall is repaired. It can be done by open or laparscopic method

Inguinal Hernia Animation - Cause and Symptoms - Animation Animation showing how hernia in the groin (inguinal) forms and the bothersome symptoms that troubles the patient.

Child-Hernia, Hydrocele A small hole or passage has developed in the muscle in the baby''s groin. Some of the intestine is poking out through this.