What is Choanal Atresia?

Choanal atresia is a rare condition that affects babies. It is a congenital defect that affects respiratory function; and caused by blockage of the choana, which is a passageway, that connects each side of the nose to the throat. These passageways are essential for breathing through the nose. This is problematic in infants, as babies cannot breathe very easily through the nose for at least a few months after birth.

The condition may be present as an isolated birth defect in a baby that is otherwise healthy or it could also be part of a genetic disorder called CHARGE syndrome that affects various organs and bodily functions. The blockage develops as a result of abnormal bone or tissue that obstructs the passageways. Fortunately, choanal atresia is a rare condition, affecting just one out of every ten thousand newborns. The condition can affect one or both nasal passages and the blockage may be partial or complete. There are two types of choanal atresia:

This is more common of the two and is also a lot less threatening. The blockage in this type of choanal atresia affects just one side of the nasal passageways. The condition often goes undiagnosed until later in childhood, as symptoms are often not present because the baby can breathe easily through the unblocked passage.

This can be life threatening as the blockage affects both passageways, causing extreme respiratory difficulty. Health care providers would be quick to spot the condition, which then requires surgical treatment.

The causes of choanal atresia are not clearly understood but it may have some connection with genetic factors and heredity. The condition is caused when recanalization of the nasal fossae does not occur during fetal development. Under normal circumstances, there is a thin tissue membrane towards the back of the nasal airway, which separates the nasal passages and the mouth area in the fetus. In case of choanal atresia, this separating tissue remains through the course of fetal development causing a narrowing or blockage of the nasal airways, which becomes problematic at the time of birth. 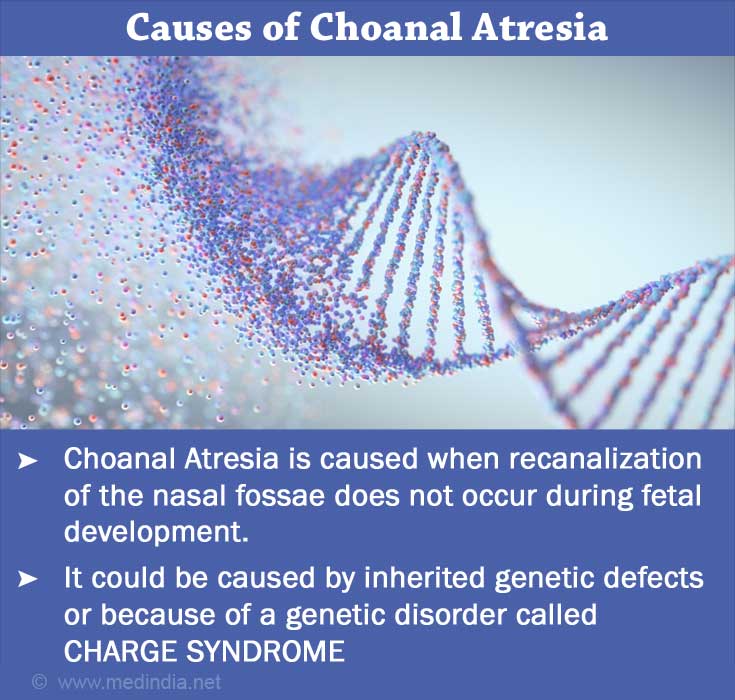 The condition could be caused by inherited genetic defects or because of a genetic disorder called CHARGE syndrome in which this would just be one of numerous abnormalities.

Although there are few known risk factors, there is suspicion that both genetic and environmental triggers may be involved. With regard to environmental triggers, certain studies have validated these suspicions as in the case of an epidemiological study in 2012 that showed a higher incidence of choanal atresia among women living in regions where there was a high presence of atrazine, a chemical compound used in herbicides in the region. Other studies since then have also suggested a similar link with second hand smoke, excessive coffee consumption and the intake of certain anti-infective urinary tract medications.

Signs and Symptoms of Choanal Atresia

In many cases health care providers will arrive at their diagnosis pretty swiftly, especially if there is difficulty inserting a nasal catheter. Doctors will also suspect choanal atresia in the event of cyanosis during breast feeding, as nasal respiration is essential while feeding. If any symptoms arouse suspicion, whether life threatening or not, health care providers will recommend certain tests to confirm the diagnosis. A physical examination will also suffice at times as it could reveal nasal obstruction.

Tests that can help in the diagnosis of choanal atresia include the following:

In cases where the blockage is severe, causing extreme respiratory difficulties, emergency medical care will be necessary. Doctors will first make efforts to resuscitate the baby if necessary and they may need to make an airway to enable the infant to breathe. Procedures like intubation or tracheostomy could be required.

If the infant learns to breathe orally, surgery may not be required as urgently and can be delayed for a while. Whether the surgery is conducted immediately or after some delay, it can help to cure the condition.

Treatment depends on the severity of the condition. In mild cases where there is no significant respiratory distress or feeding difficulty treatment could include the following:

In severe cases, where there is a life threatening risk, usually because of bilateral choanal atresia, there is no room for delays in treatment. Treatment in such cases will involve evaluation of the patient for any other anomalies. Once the patient is stable, surgery should be performed immediately. 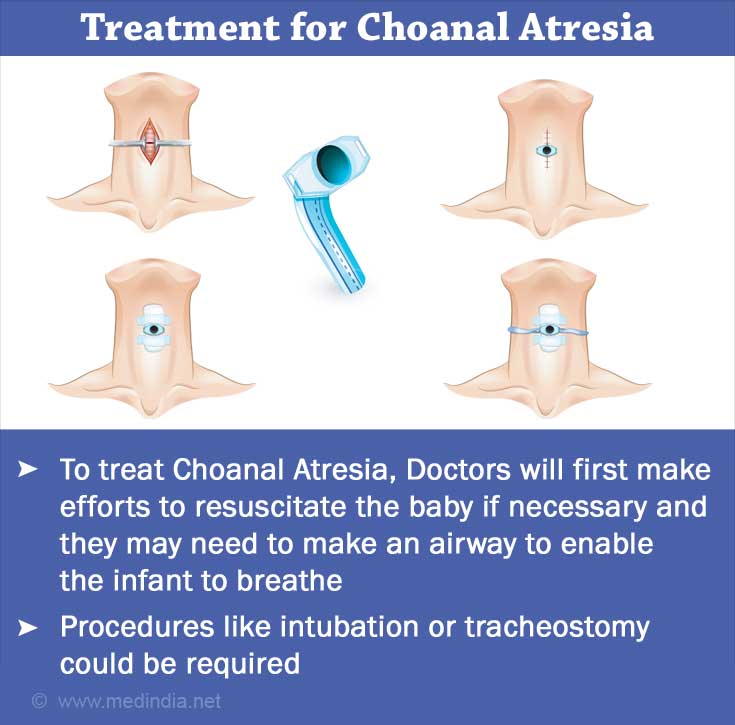 There are different surgical approaches to dealing with choanal atresia and all of them have the common goal of enabling the baby to breathe independently by opening the nasal passageways. All of these procedures are performed in an operating theatre under general anesthesia and include the following:

Whether or not surgery is performed, if your infant suffers from choanal atresia, periodic evaluation is necessary to ensure normal functioning of the airways and to rule out the presence of any feeding issues. Feeding and swallowing issues may be persistent and it is advisable to seek specialized care from speech pathologists and gastrointestinal specialists. If the child suffers from a syndrome like CHARGE or has other congenital birth defects, it would be best to get subspecialty evaluations and coordinated care.

The outcome of treatment is usually very good and is only uncertain when there are other complex syndromes present. With surgical intervention however, the choanal atresia should not pose any long term problem in both groups of patients.

The risk factors of choanal atresia cannot really be avoided, as we still do not have a clear understanding about the causes of the condition. We can do little about genetic factors, which may contribute to the problem. Certain environmental allergens or triggers have also been identified as being possible risk factors in the recent past, and in light of these findings, it would be a good idea to avoid or reduce exposure to the following during pregnancy:

Exposure To Common Herbicide Raises Birth Defect Risk Exposure to common herbicide, which is used in United States, increases the risk of congenital abnormality of the nasal cavity known as choanal atresia.