What is Preterm Delivery?

The birth of a baby before completion of 37 weeks of pregnancy is known as preterm delivery or preterm birth. Studies show that up to 1 in 10 babies are born prematurely. Babies born early can have several short term and long term medical complications. They may experience difficulty feeding, breathing, vision and hearing issues, cerebral palsy, behavioral problems, and developmental delays.

The signs of early labor are similar to those of regular labor and include contractions, backache, pelvic pressure, and cramps. For women who have had prior such preterm deliveries, progesterone supplements can be helpful to reduce the risk. Other women who may have a shortened cervix can undergo surgery in which the cervix is stitched till delivery. This is known as cervical cerclage.

Preterm birth is characterized by certain features that can be identified in babies. These include lanugo (a fuzzy kind of hair), breathing issues, absent reflexes, reduced body temperature, and a small body with a big head. Unfortunately, upto 17% of deaths in infants were due to being premature birth.

Premature births have several possible causal factors. Some include:

What is the Link between Stress and Preterm Delivery?

There is a strong association between stress and preterm delivery. One study found that among the mothers who were stressed during pregnancy, 54% had premature babies. This comprises 23% of all women. These babies are also likely to have low birth weight. 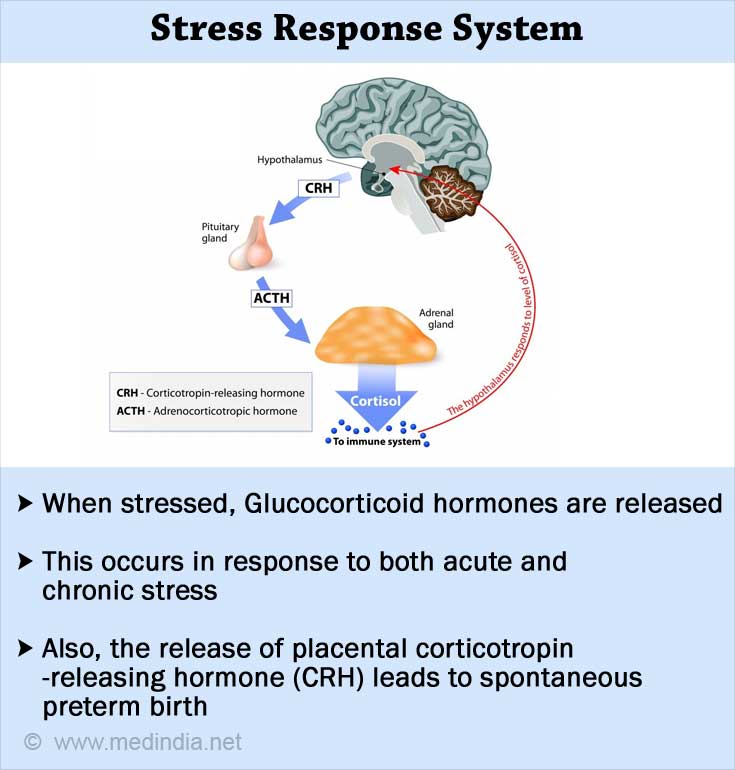 CRH leads to prostaglandin production which facilitates birth. High levels of maternal plasma cortisol were found to play a role in the same. This increased level of cortisol is seen between 27 and 37 weeks of pregnancy. Hair and urinary cortisol have been measured to track these results.

There is a link between anxiety and pregnancy as well. Women who experienced an increase in anxiety in the gestation period were 170% more likely to have a premature delivery. Women who work in jobs involving high labor and stress are twice as likely to experience preterm delivery. Depression and pregnancy are found to be related. Depressed mothers were four times more likely to have a child early.

Stress leads to the release of cytokines. This can affect the immune system, making the mother more prone to infections. These infections in turn can lead to preterm delivery. Cytokines can also directly lead to premature birth. Stress can also affect the health behavior of the mother which plays a role in birth.

Stress is experienced by different individuals differently. The psychological and physiological responses to events vary from person to person. Each individual perceives situations differently. Therefore beyond certain common factors, perceived stress plays a role in preterm birth. One study shows that early experience of stressful events makes ones nervous system more susceptible and reactive to stress at a later age (as a mother for example).

What are Possible Stressors during Pregnancy?

Stressful factors are countless and also include perceived stress. Some factors however have been known to affect pregnancy based on studies. The possible stressors during pregnancy include: 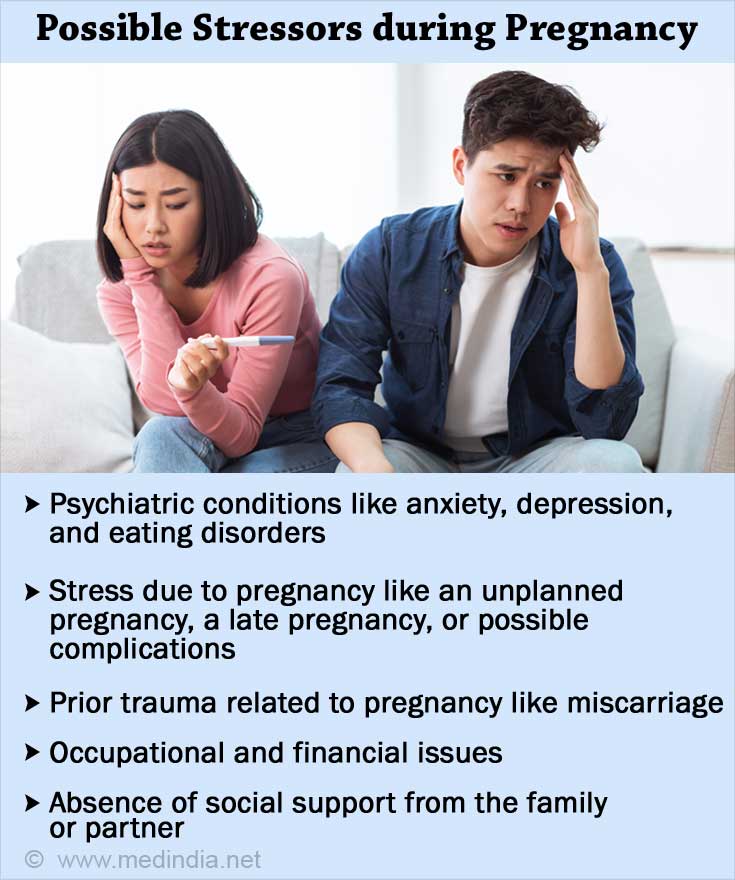 How to Reduce Stress during Pregnancy?

Several techniques can be useful to reduce stress during pregnancy. 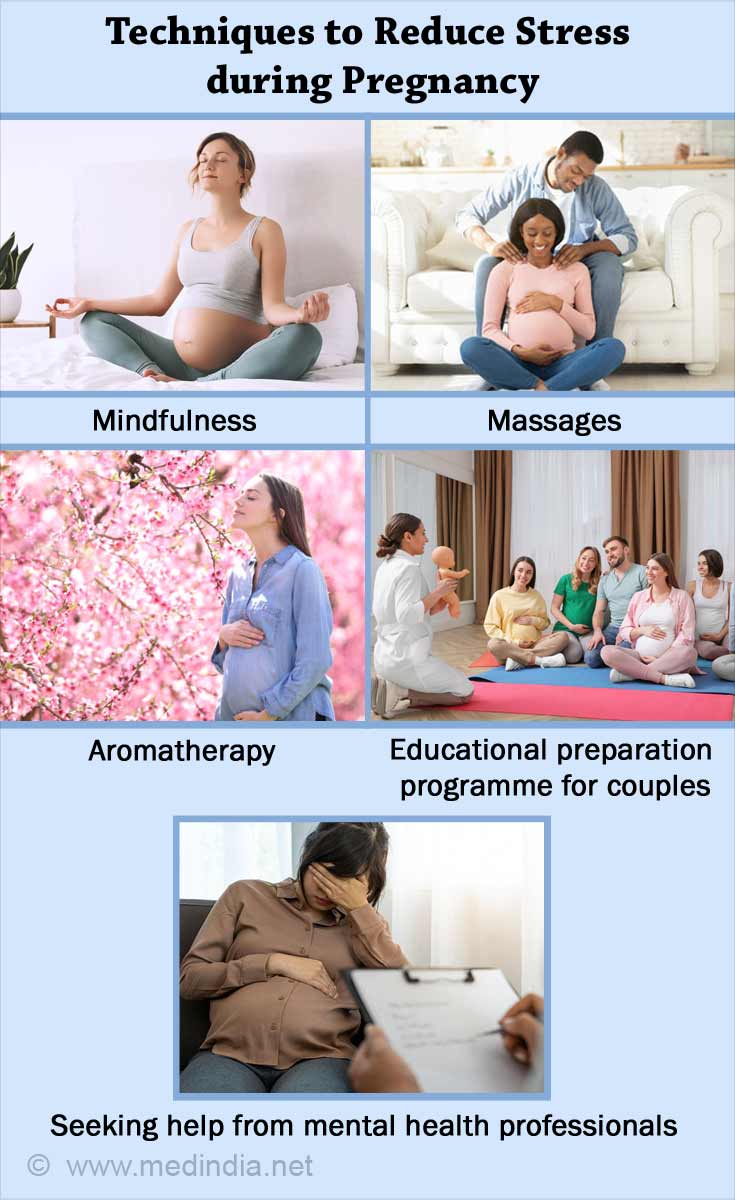 Mindfulness has been found to be an effective method of stress reduction. Observing breath, thoughts, and the environment can help one orient themselves to the present moment. This can also help one understand their triggers. A recent study found that mindfulness reduced distress prenatally and postnatally.

An educational preparation programme for couples was found to be beneficial in reducing stress and preterm births. Antenatal classes are helpful for pregnant mothers to understand what to expect. Pregnancy support groups can also be helpful to voice concerns and extend support. Lack of social support was found to be associated with preterm delivery. Finding ways to manage financial constraints can also be helpful. Asking for support is normal and vital. Lack of support was associated with postpartum depression.

Massages and aromatherapy may also help ease the tension in the body. Exercise, yoga, dance, and swimming have been found to be beneficial and aid relaxation. Taking care of diet and sleep are also important. Hypnotherapy can be helpful in this regard. Engaging in hobbies and leisure activities is also important.

Seeking help from mental health professionals can be helpful for women who have psychiatric conditions, or severe levels of distress. Mindfulness-integrated cognitive behavior therapy has been found to be helpful in treating anxiety and depression during pregnancy.

Stress and Miscarriage
New research indicates that too much stress could lead to miscarriage. What are the risk factors to avoid? Read on to know more!

Stress During Pregnancy Put Unborn Babies at Risk of Life-threatening Diseases
Researchers at Edinburgh University have found that women who suffer from stress during pregnancy are more likely to pass on life-threatening diseases to the unborn child and even future generations.