Gestational diabetes is defined as carbohydrate intolerance that is first recognized during the course of pregnancy. It occurs in 4% of all pregnancies and is considered as one of the most common metabolic disorders affecting pregnant women.

The diabetes, which usually is diagnosed for the first time during pregnancy, may persist even after delivery. As a consequence of gestational diabetes, there is a very high blood sugar level. The severity of carbohydrate intolerance may vary in its severity in different individuals. 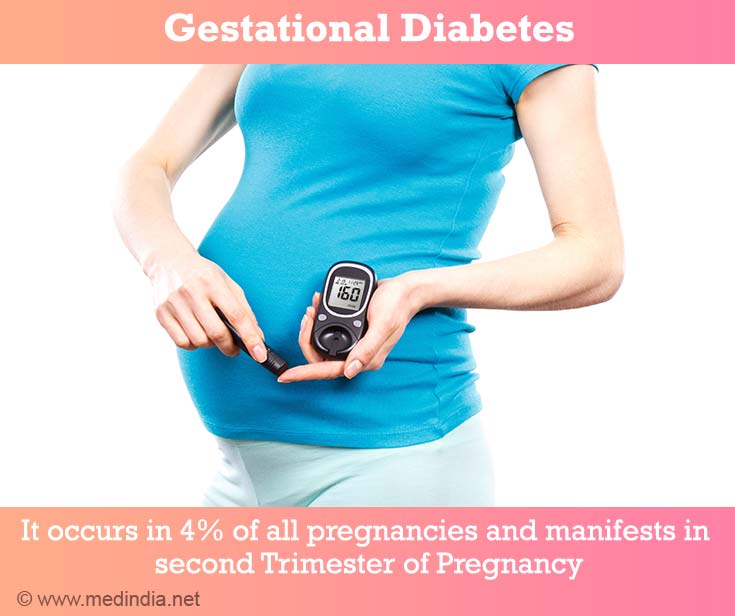 Pregnancy is a period that needs careful follow- up of the pregnant woman, as it involves the well-being of both the mother and the growing baby, inside the womb of the mother. So complications of any sort, during the antenatal period, has to be dealt with immediately. This holds good for gestational diabetes too wherein the pregnant woman must be subjected to regular checkups to ensure a smooth course of pregnancy and its pregnancy, thereafter.

Gestational diabetes usually manifests during the second trimester of pregnancy. In the majority of affected women, there is recovery from the diabetic state after delivery. In some cases an existing diabetic condition may be brought to the forefront during antenatal examinations. In such cases, the diabetes tends to persist even after the delivery of the baby.

Nevertheless, studies have shown that women who have had gestational diabetes, are predisposed to diabetes later in life. This may be more related to their Body Mass Index (BMI) and unhealthy lifestyles.

Gestational diabetes is cause when body should be able to use its insulin more effectively. This is condition mostly found in pregnancy. Therefore, always be aware of diabetes in pregnancy.

According to my experience Gestational diabetes diet is very helpful to control it.This is very simple way to control diabetes.

There are a lot of places to get good home health medical supplies online. It is important that you have the right equipment when recovering from any surgery or sickness at home. The proper aids can help you recover much quicker and easier with less pain.

Diabetic Diet
DM as it is popularly called is a metabolic hormonal disorder. It is caused when the hormone "insulin" produced by the pancreas starts playing truant in the body. The two major forms of diabetes are type 1 (previously called insulin-dependent ...

Diabetic Retinopathy
The term 'diabetic retinopathy' refers to changes in the retina which often occur in people with diabetes.

Body Mass Index
The BMI calculator helps you assess your weight indicating if it is normal or if you are underweight or overweight, based on your height.

Insulin
This medication is a hormone produced in the pancreas, prescribed for type 1 diabetes. It is also used for type 2 ...

Glycemic Index
GLYCEMIC INDEX (GI) is a scale which helps to rank carbohydrate- rich foods, depending on how they affect blood glucose levels, by comparing them to glucose.

Quiz on Gestational Diabetes
Gestational diabetes occurs in women during pregnancy when blood glucose levels increase in their body. It is diagnosed during the 24th week of pregnancy. Take this quiz to know more about its complications and how will your baby get affected if its ...

Neonatal Hypoglycemia
Neonatal hypoglycemia is defined as a blood sugar level of <30-45 mg/dL in a newborn. The hypoglycemia in newborns could result in developmental delay.