WHO: Impossible to Predict Outcome in China's Bird Flu Outbreak 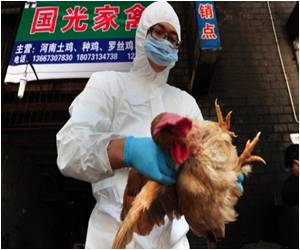 The head of the World Health Organisation said that it is impossible to predict the evolution of China's human H7N9 bird flu outbreak as researchers are still trying to understand the source of human transmission.

According to the latest official data, H7N9 avian influenza has infected 130 people in China, and killed 35, since it was found in humans for the first time in March.

"Influenza viruses constantly reinvent themselves. No one can predict the future course of this outbreak," Margaret Chan said, but added that "although the source of human infection with the virus is not yet fully understood, the number of new cases dropped dramatically following the closing of (China's) live poultry markets."


"At present, human-to-human transmission of the virus is negligible," she said in her address to some 3,000 delegates attending the 66th World Health Assembly in Geneva.
Advertisement
Chan also thanked China for its close collaboration with WHO in sharing its information on the situation and for having "promptly traced, monitored, and tested thousands of patient contacts".

Chan also talked about the deadly SARS-like coronavirus, detected for the first time in the Middle East last year. "To date, 41 cases, including 20 deaths, have been reported," she said, adding that "though the number of cases remains small, limited human-to-human transmission has occurred and health care workers have been infected."

"These two new diseases remind us that the threat from emerging and epidemic-prone diseases is ever-present. Constant mutation and adaptation are the survival mechanisms of the microbial world. It will always deliver surprises."

Source: AFP
Advertisement
<< Your Mood Could Improve With The Help Of A Brain Ultrasound
Mortality in the ICU Can Be Predicted By Metabolic Biomarke... >>