Watch Out: Greening of Lakes Can Increase Greenhouse Gas Emissions 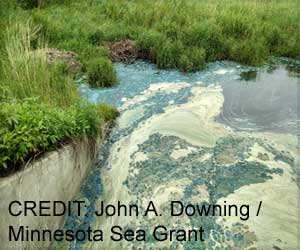 Greening of lakes can significantly increase greenhouse gas emissions. Therefore, it is not always good to be green. The findings of the study are published in the journal Nature Communications.

The good news is global and local. Keeping inland lakes from turning green means less greenhouse gases entering the atmosphere and contributing to climate change. Healthy drinking water, fishing, and recreation opportunities are also increased when waters are not green.


What's wrong with being green? Toxins released by algal blooms can ruin drinking water. When dense algae blooms die, the bacteria that decompose the algae also deplete oxygen in the water. Without oxygen, fish and other animals suffocate. Globally, such green waters are also an important contributor to atmospheric methane -- a greenhouse gas that is up to 34 times more potent than carbon dioxide.


‘Keeping inland lakes from turning green can reduce greenhouse gas emissions entering the atmosphere and contributing to climate change. Therefore, it is necessary to prevent greening of lakes in order to get healthy drinking water, improve fishing and increase recreation opportunities.’
Read More..


"We estimate that the greening of the world's lakes will increase the emission of methane into the atmosphere by 30 to 90 percent during the next 100 years," said Jake Beaulieu of the United States Environmental Protection Agency and lead author of a paper on lake greening and greenhouse gas emissions.

According to the authors, three distinct mechanisms are expected to induce increases in lake greening or eutrophication during the next 100 years. First, human populations are expected to increase by 50 percent by 2100. More people means more sewage and more fertilizers that runoff land. At current rates of population growth and climate change, eutrophication in lakes will increase by 25 to 200 percent by 2050 and double or quadruple by 2100.

Second, increased storms and stormwater runoff will increase the nutrient losses from land to inland waters. Third, as the climate warms, lakes will warm. Warmer waters produce more algae. Additionally, the area of the planet covered in water is expected to increase, which will result in more methane-emitting surface waters.

"It is really surprising how much eutrophication could increase in the next 50 to 100 years," said co-author John A. Downing of the University of Minnesota Sea Grant program. "People do four important things that affect eutrophication: they eat, they excrete, they make more people who eat and excrete, and they alter landscapes and climate," said Downing.

Using projected population growth and climate change, the authors simulated the eutrophication of lakes under four different and conservative scenarios of future phosphorus loading from low to high: 80, 130, 170, 200, and 220 percent of current levels.

"We used phosphorus because the relationship between phosphorus and plant or algae growth is well established," said co-author Tonya DelSontro of the University of Geneva. "Currently, the single largest source of atmospheric methane is wetlands. If the phosphorus in lakes triples, then methane emissions from lakes could be twice that of wetlands."

The authors used a statistical model they created in 2018 that correlates methane emissions with lake size and chlorophyll, which is a measure of high algal biomass stimulated by phosphorus. By using global distribution of lake size and total lake area, climatic heating of lakes, future phosphorus concentrations and storm-driven nutrient runoff they were able to estimate future lake methane emissions, which the authors say has not been done before.

The optimistic outcome is that improved nutrient management practices could reverse the greening or eutrophication of lakes and thereby reduce methane emissions. Additionally, local action to improve water quality could have important global consequences.

"In keeping and improving the quality of our fresh water we win twice," said Downing. "Once in the atmosphere and once back down here on Earth."

Greenhouse Gas Emissions Could Spell Disaster for Mankind by 2100
Greenhouse gas emissions can adversely affect the severity of climate change on humanity. The simultaneous occurrence of multiple climate hazards could make human survival on the planet impossible by 2100.
READ MORE

Keeping Pavements in Good Shape Reduces Greenhouse Gas Emissions
When pavements are kept in good condition, the maintenance costs and the emissions of greenhouse gases could be reduced, reveals study.
READ MORE