Consumption of Vitamin E may prevent the risk of pneumonia in non-smoking, middle-aged men, revealed a recent research conducted at the University of Helsinki.

The researchers studied whether Vitamin E supplementation might influence the risk of community-acquired pneumonia. They analyzed the data of the randomized trial (Alpha-Tocopherol Beta-Carotene Cancer Prevention [ATBC] Study) which was conducted in Finland between 1985-1993 and included male smokers aged from 50 to 69 years.


‘Consumption of Vitamin E may prevent the risk of pneumonia in non-smoking, middle-aged men, revealed a recent research.’


Among the 7,469 participants who started to smoke at a later age, Vitamin E supplementation reduced the incidence of pneumonia by 69% in a subgroup of 2,216 light smokers who exercised in their leisure time. In this subgroup, Vitamin E prevented pneumonia in 12.9% of the participants by the time they reached the age of 74 years, which corresponds to one in eight getting a benefit from the vitamin.

The vitamin did not have a significant effect on participants, who smoked heavily or had not been taking exercise. One-third of the 7,469 participants quit smoking for a period and 27 of them got pneumonia. These 27 cases of pneumonia can be used to estimate the effect of Vitamin E on non-smoking males.

Furthermore, the participants of the ATBC Study had mostly been born in the 1920s and 1930s, and lived through the World War II years. Lead author Hemila states, "Thus, even though the 72% decrease in pneumonia risk with vitamin E in ATBC participants who quit smoking may be a real effect, it should not be generalized to current elderly males in Western countries. Further research on vitamin E in nonsmoking elderly males is warranted."

The study was published in the journal of Clinical Interventions in Aging. 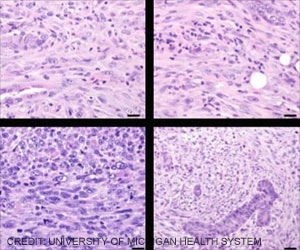 How Pneumonia-Causing Bacteria Invade the Body
A molecule called siderophores are more powerful at grabbing iron than the proteins that our own bodies produce. Bacterial siderophores do much more than just grab iron.
READ MORE

New Model Explains How Secondary Bacterial Pneumonia Occur
Influenza A virus infection leads to the dissemination of S. aureus from the nasal cavity into the lungs, resulting in the development of secondary bacterial pneumonia in mice.
READ MORE