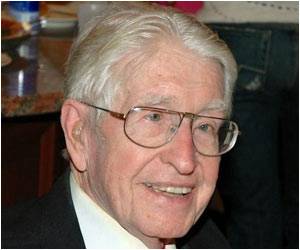 William Staub - inventor of treadmill dies at his home. He was 96.

His family said that he was still using a treadmill as recently as two months ago, Fox News reported.

The mechanical engineer built his treadmill in the late 1960s. It was made up of 40 steel rollers covered by an orange belt, with orange dials to determine the time and speed.


Staub had owned an aerospace company but soon focused on selling his treadmill.

Health and fitness pioneer Dr. Kenneth Cooper said that the treadmill was almost exclusively used by doctors to perform stress tests until Staub came along.

Walking on a treadmill at a comfortable, low-intensity speed for a longer duration improves mobility in Parkinson's patients, revealed in a study.
Advertisement
<< Type 2 Diabetes Drug is Clinically Effective for Long-term ...
Fresh Insights Into Ties Between Native-Americans and Diabet... >>

Walking on a treadmill for one hour a day may slow the progression of nonalcoholic fatty liver disease in obese people with prediabetes.

More News on:
Exercise and Fitness