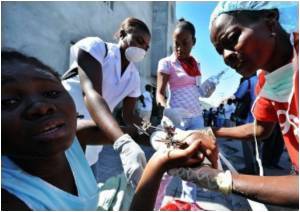 There are some 120,000 people with the human immunodeficiency virus or HIV in Haiti, which was hit by a huge earthquake on January 12, killing 250,000 people and leaving 1.5 million homeless.

The inmates at Haiti's only women's prison cry out in desperation as warden Marie-Yolaine Mathieu makes her rounds, hoping that she will hear their case and perhaps, help secure their release.
Advertisement

An international pledge of 500 million dollars (385 million euros) in reconstruction aid has been slow in materialising, with the World Bank saying last week that the fund was only 20 percent full.


But people with HIV and AIDS are suffering even more as their previously promised aid also continues to trickle in only very slowly or not at all, according to organisations attending the World AIDS Conference this week in Vienna.

International donors and Haitians are increasingly frustrated at the slow pace of recovery and reconstruction, with millions still homeless.
Advertisement
"It's very difficult for grassroots organisations to operate since the quake. We simply don't have the means to do so," said Liony Acclus, head of PHAP+, a Haitian coalition of organisations for people with AIDS.

Around 90 percent of all funding for AIDS in Haiti comes from abroad, Acclus said.

"Since the quake, the programmes set up by international organisations to help people with AIDS to earn a living are no longer operating," complained Edner Boucicaut, head of Housing Works, a non-governmental organisation.

It was still common practice that prospective employees had to prove they were HIV negative to get work, Boucicaut said.

"We have to stop helping Haiti on paper and start taking action," said Liony Acclus.

However, there are more optimistic voices.

"We've lost 70 percent of our office space. But that isn't stopping us working," said Jean-William Pape, director of the Haitian NGO Gheskio.

"The situation is not going to deteriorate, because health organisations are well organised."

"What we hear about Haiti is always very negative, but before the earthquake, good things were happening there, in the health sector particularly," said Jonathan Quick, director of Management for Social Health (MSH).

The prevalence rate of HIV in Haiti has declined from 6.2 percent in 1993 to 2.2 percent in the middle of this decade, Quick noted.

"But we still don't have second-line antiretrovirals (drugs used when a patient develops a resistance to the first treatment), and even before the quake, 43,000 people were not receiving treatment," he said.

The organisations all share the view that the entire population be integrated into the process of reconstruction.

In a joint statement, NGOs Gheskio, MSH, the Global Health Council and Partners in Health, called on the international community to direct its support to a "'whole of society' integrated approach to strengthening health systems as the best way to sustain HIV/AIDS prevention, care and treatment over the long term".

Edner Boucicaut complained of a lack of coordination in the programmes of the NGOs and the government.

"Integrate us into your programmes," he said.

There is a general scepticism towards the public authorities in Haiti, with organisations saying people expect more of the UN's special envoy Bill Clinton than their own president Rene Preval.

They've been forced to swap school books for pistols, homework for hold-ups and drug-dealing: with no parents, some of Haiti's earthquake orphans have turned to slum gangs as ersatz
Advertisement
Advertisement