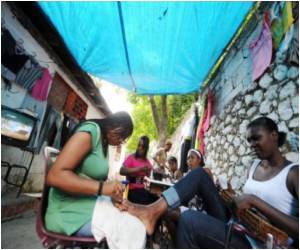 Julie Colin gently wrapped a scarf around her client's curlers to protect the precious new hair-do from the thick dust swirling around outside her salon in a makeshift Haitian camp.

It's been almost five months since Colin, 26, lost her home and her beauty salon in the January 12 earthquake that killed hundreds of thousands of people and devastated Haiti's capital, Port-au-Prince.


International donors and Haitians are increasingly frustrated at the slow pace of recovery and reconstruction, with rubble still filling the streets and millions of homeless struggling to survive in some 1,300 tent cities.


But determined to get on with her life, Colin, who lives in a camp in what was an upscale golf club in Petionville, wasted no time relaunching her beauty parlor under the cramped tarpaulin she shares with family.

Her new surroundings can't compare to her once-thriving brick and mortar, modern salon though.

"Oh, it was chic," she sighed, looking around at the dirt floor covered by a blue plastic tarp, and peering out the open doorway that looks out onto drainage trenches and a steep path that turns to mud when it rains.

"It wasn't like this. It had everything," she said, a tinge of nostalgia in her voice. "I can manage to work here, but I'm still missing a lot of things. Like hair dryers, and I don't have electricity."

All treatments are half price these days -- she knows everyone is short on cash.

Manicures and pedicures are less than three dollars, acrylic tips about 1.20 dollar extra. Getting your hair washed and styled costs about 10 dollars. Colin wants women to be able to afford the little luxuries she can offer.

New and old clients are ecstatic at the chance for some pampering. So far, said Colin, six loyal customers who still have their homes make as many as three bus transfers to get to this tiny oasis from miles away.

Others, like Katiana Mugascin, a 25-year-old customer of two years, live in this same camp for internally displaced people, and are clinging to a weekly ritual that just feels good.

"I don't feel okay at all, because I am not used to living like this," said Mugascin, looking in the mirror at her newly-shaped eyebrows.

"And we are all traumatized because of the earthquake," she said.

But she quickly smiled and began laughing, saying being in the salon feels just like before, since it's a chance to laugh and joke around, in a brief diversion from the harsh realities of daily life outside.

International aid groups discourage people from establishing anything permanent in the camps, since they are only supposed to be temporary shelters.

Mugascin and Colin both stressed they plan to rebuild their homes and move out of the camp as soon as possible.

"She is really brave to pull this off with the meager means she has right now," said Colin's sister Farah, who helps out at the salon.

The younger woman looked on with pride as her sister adjusted acrylic tips on another client's pedicure and added: "It's a really big success."

The salon makes roughly 20 to 40 dollars a day, and Colin says she has even managed to get many new customers by setting up shop in the camp.

Her's is one of a handful of make-shift salons. But her loyal clients say it's the best.

After Horror Quake, Haiti's Rum Production Swirls Back to Life
At the fabled Barbancourt rum plant, the sweet waft of production is back in the air after the horror earthquake rocked Haiti four months ago.
READ MORE 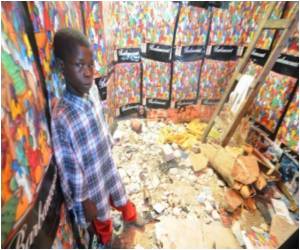 Slum Gangs Become Father, Mother to Haiti's Orphans
They've been forced to swap school books for pistols, homework for hold-ups and drug-dealing: with no parents, some of Haiti's earthquake orphans have turned to slum gangs as ersatz
READ MORE 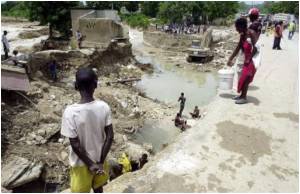 Haiti and Its Economy Being Rebuilt by 'Cash for Work' Program
Dozens of Haitians work to reinforce river beds in simple conditions armed with rudimentary tools and often barefoot.
READ MORE

Schools Lure Back Students With a Free Daily Meal in Haiti
A meal of rice, a few vegetables and a little bit of meat is being offered free to lure Haitian children back to school.
READ MORE