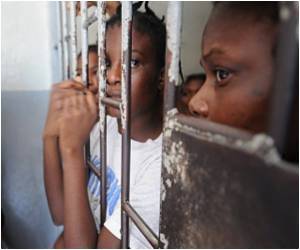 The inmates at Haiti's only women's prison cry out in desperation as warden Marie-Yolaine Mathieu makes her rounds, hoping that she will hear their case and perhaps, help secure their release.

"Director, director, I need to speak to you," calls out one woman with matted hair and a blemished face, whose days of incarceration without a conviction turned first into weeks and now months.
Advertisement 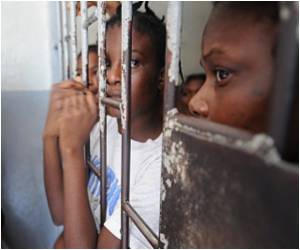 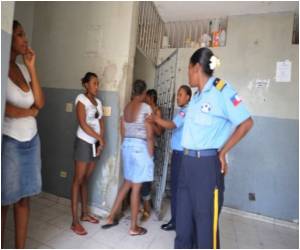 Female Haitian prisoners are escorted by guards into a cell in the prison for woman in Petion-ville, Haiti 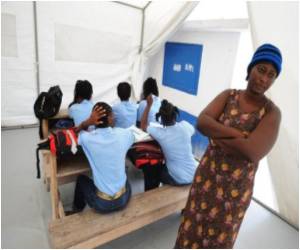 Women prisoners in Haiti go to school in Petionville, Haiti

Like so many others, the woman make a futile plea for Mathieu's intervention.


"I've been in this prison for six months. I have a 10-year old child who has not been cared for since my mother died during the earthquake," she cried.
Advertisement
"I can't take it any more," she screams, beside herself with despair.

This impoverished Caribbean country's broken judicial system has failed its citizens at every turn. But it has been especially delinquent in prosecuting those who face criminal charges but have never been convicted of crimes.

Haiti's main in prison in Port-au-Prince was virtually destroyed by the 7.0-magnitude quake on January 12, and almost all of its estimated 4,000 male prisoners escaped.

But the women's institution -- condemned years ago by UN officials as "cruel and inhumane" -- still holds its unhappy occupants. Built for around 30 inmates houses 300.

The prison director said however said she feels for the women, but that she is powerless to improve their plight.

"They keep arresting the women and sending them to us," Mathieu said, "and the criminal justice system does not free them. What is one to do?"

The problem is not unique to this facility.

The United Nations Mission in Haiti has frequently voiced concern over the years about overcrowding in the country's prisons, where the majority of inmates have not been convicted and are being held in preventive detention.

Even before January's massive quake that killed as many as 300,000 people and reduced much of the capital region to rubble, only about one prison detainee in 10 had actually been convicted of a crime.

Like other Haitian prisons, the women's facility in Petionville on the outskirts of the capital makes a practice of keeping inmates in preventive detention, sometimes for years.

Even the country's chief prosecutor, Auguste Aristidas, decried the conditions as a "gross injustice that is being carried out against Haitian women."

The situation has become only more chaotic since the quake.

"There is a lot of disorder in the system. Some files cannot be found, which prevents us from prosecuting their cases," Aristidas said.

The human rights section of the UN mission for years has urged the creation of special commissions to study individual cases as a way to ease overcrowding at the country's prisons.

None of the proposed reforms ever got off the ground however, and the desperate women here continue to languish while waiting for justice.

One woman, about 60 years old, diabetic and suffering from high blood pressure, has been waiting for three years to be charged.

A 39-year old inmate, who was eight months pregnant when she was imprisoned, lost her baby because of the deplorable prison conditions. Three others were forced to give birth in a tiny ill-equipped prison infirmary.

Even the youngest inmates are incarcerated for years at a time, often for minor infractions.

A case in point is Sherline, who was locked up when she was 16, and today is 21. "In 2005, I had problems with my brother, who felt that I was coming home too late at night," she recounted.

"He drove me to a police station, to teach me a lesson. I've been locked up here ever since," she said.

Another inmate, Myrline, 19, was arrested for stealing five years ago but has never been seen by a judge.

"The minors sometimes wind up here for minor crimes punishable by three to six months in prison, but they sometimes languish five or six years behind bars," Mathieu said.

"It breaks my heart to see these children spending the best years of their lives in prison.

Number of Women Prisoners in US Grows Fast, Now Allowed to Raise Children Inside Jail
As the population of women prisoners is growing exponentially in US, authorities are implementing .....

Lebanon's Archaic Laws Make Many Freedoms Unavailable for Women
The thousands of women parading along Lebanon's sunny beaches this summer in skimpy bikinis or ......

Prison Healthcare Costs Skyrocket In California
California spending hundreds of millions of dollars a year on the healthcare of those convicted for ...