The Benefit of a Bilingual Brain 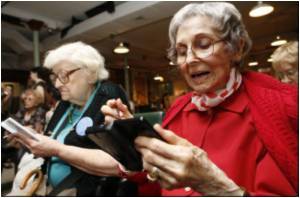 A recent study has said that the brain of older bilingual adults develop novel strategies to process language in order to compensate for age-related declines in brainpower.

Concordia University researchers studied two groups of fluently bilingual adults - aged from 19 to 35 and from 60 to 81 years old - and found significant age-related differences in the manner their brains interpreted written language.

"We wanted to know whether older adults relied on context to process interlingual homographs (IH) - words that are spelled the same in both languages but have a different meaning," said lead author Shanna Kousaie, a PhD candidate at Concordia University's Department of Psychology and Centre for Research in Human Development (CRDH).


As part of the study, subjects were asked to read hundreds of trios of words.

The first word in the triplet was in either English or French, indicating the language of the IH, putting it in context for readers.

Head injury or traumatic brain injury is a leading cause of disability among children and young adults that leads to varying degrees of physical and mental stability. Fortunately, it is also one of the preventable brain disorder.
Advertisement
The second was an IH - a word such as "coin," which means "money" in English but "corner" in French.

The third word was one that might or might not help the person understand the meaning of the IH more quickly.

Subjects' neurophysiological responses to these words were recorded using an electroencephalograph, an instrument that records the brain's electrical activity.

These findings were based on an experiment aiming to determine the relative speed of responses for younger and older bilingual research participants and on the differences in their EEG recordings as they "processed" the word triplets.

Both the measures indicated younger participants relied less on the first (contextual) word when processing the trios of words in the test.

"As we get older, our working memory capacity and ability to quickly process words declines," said Phillips.

"As a result, older adults become a little more strategic with capacity. It's important to stress these are normal and mild age-related changes. Participants didn't have any cognitive deficit. Rather, they were making the best use of mental resources by using context to help them process language," he added.

These findings shed light on how bilingual adults process language.

"Our study suggests that bilingual adults, as they age, are able to find strategies to compensate for changes in language comprehension," said Phillips.

The findings were published in the journal Aging, Neuropsychology, and Cognition.

An active brain can certainly help in improving memory by strengthening the connections between neural impulses in brain.
Advertisement
<< Biophysicist Targets Protein As a Way to Stop Breast, Prost...
Cervical Cancer Test by Swiss Firm Receives Approval from US >>

The Benefit of a Bilingual Brain Personalised Printable Document (PDF)