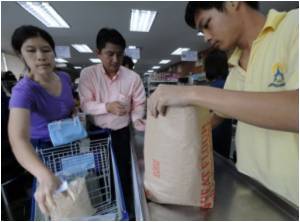 In UK seven supermarket chains have joined the government's health deal. This deal is aimed at improving public health.

Asda, Marks & Spencer, Morrisons, Sainsbury's, Tesco, The Co-operative and Waitrose have all signed up to the plan, being officially announced on Tuesday.

It comes as six major health organizations refused to enlist as partners on the alcohol aspects, accusing the government of allowing the drinks industry to dictate health policy.


In the latest move, retailers will increase awareness of alcohol units on drinks and will give cash to regional programmes aimed at tackling alcohol abuse.

Supermarkets in England have packed chicken on their shelves, that show campylobacter virus contamination on the packaging, according to a study.
Advertisement
It is hoped other sectors such as manufacturing and catering will join up in the future.

At the weekend Heineken announced it will cut the alcohol content of one of its major brands after signing up to the responsibility deal.

The firm, which makes drinks including Foster's, John Smith's, Strongbow and Bulmers, will also carry unit information on all its branded drinking glasses.

Asda has also pledged to end front-of-store alcohol displays by the end of April.

Health Secretary Andrew Lansley wants firms and charities to join the deal to reduce the amount of unhealthy sugar, salt and fat in food, and encourage people to drink responsibly.

He hopes measures aimed at better labelling and more information for consumers will eliminate the need for regulation.

Around 150 companies have already signed up to some aspects of the deal, including putting calories on menus, cutting salt and removing trans fats.

But Alcohol Concern, the British Medical Association (BMA), the Royal College of Physicians, the British Association for the Study of the Liver, the British Liver Trust, and the Institute of Alcohol Studies, are refusing to support the deal.

Don Shenker, chief executive of Alcohol Concern, said it represents "the worst possible deal for everyone who wants to see alcohol harm reduced" and set no sanctions if industry fails on its pledges.

Dr Vivienne Nathanson, director of professional activities at the BMA, said: the Government has "chosen to rely on the alcohol industry to develop policies", adding: "Given the inherent conflict of interest these will do nothing to reduce the harm caused by alcohol misuse."

However, Andrew Opie, food director at the British Retail Consortium, says the deal is a "significant development".

"Customers make the final decision about what goes in their baskets but retailers do a lot to help shoppers look after their own and their families' health," he said.

"Retailers have pioneered healthy eating initiatives such as the introduction of clear calorie information on packs and the removal of artificial trans fats. They offer customers thousands of healthy products to choose from and these are often included in promotions and special offers."

Some cough and cold medicines meant for kids have been withdrawn from the shelves in supermarkets, the Ministry of Health in New Zealand has said.
Advertisement
<< Kitchen Appliance Designed To Help Arthritis Patients
Obese Run Risk Of Dementia Too >>

Calculate Ideal Weight for Infants Post-Nasal Drip The Essence of Yoga How to Reduce School Bag Weight - Simple Tips Daily Calorie Requirements Drug Side Effects Calculator Hearing Loss Calculator Iron Intake Calculator A-Z Drug Brands in India Blood Donation - Recipients
This site uses cookies to deliver our services. By using our site, you acknowledge that you have read and understand our Cookie Policy, Privacy Policy, and our Terms of Use