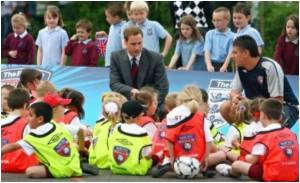 A recent study recommends inclusion of differently-abled children in regular schools. It claims that such an arrangement works well for all kids involved.

Tim Loreman, a professor of education at Concordia University College of Alberta in Edmonton, conducted a study on Grade 1 and 2 children in rural Alberta to reach the conclusion.

Children who are disabled are at increased risk of becoming obesity. Now, a team of researchers has described possible ways to prevent or treat this problem.
Advertisement

However, he admits educators need to pay a bit more attention to the school experience of children who are not fully abled.


Loreman, in a paper presented at the 2010 Congress for the Humanities and Social Sciences taking place at Montreal's Concordia University, said there is a big debate in Canada on practices of inclusion, which vary considerably across the country.

Most people view the iPad as a slick multi-media entertainment platform, but Gregg Vanderheiden, a university professor, sees other potential uses for Apple's new touchscreen device.
Advertisement
The viability of inclusion is widely debated, though research suggests that inclusion benefits all students.

Loreman says his study supports the view that inclusion is the best policy. He says he defines an inclusive school as one in which children of all abilities learn together in regular classrooms, and in which there is adequate support for staff and pupils as well as good collaboration between school and home. In other words, he says, children with 'exceptionalities,' as he prefers to call them, are not merely dumped at school and left to sink or swim.

Loreman says his study looked at the experience in a school district in rural Alberta that had decided to embrace inclusion - in part because geography made bussing 'exceptional' students to a single school prohibitive.

His group devised a simple Yes-Sometimes-No questionnaire suitable for very young pupils and, with the help of university student facilitators, interviewed children in Grades 1 and 2. They also did a case study focussing on a single 'exceptional' student in which they interviewed all the people in the child's educational life, right down to the driver of the school bus.

What they found was that everyone was having a positive experience in school. All children felt, for example, that the teachers cared about them and had high expectations of them. Loreman says that while the 'exceptional' pupils reported being less positive, it was really a question of degree.

One main difference noted, he says, relates to the degree of connectedness: The pupil in the case study reported having a lot of friends, but there was some doubt as to how deep those friendships were, and whether the pupil was as connected to the peer group as fully abled ones. "Our findings show the focus on improving the situation for children with exceptionalities is valid," says Loreman.

Disabled children in the UK are more likely to likely to live with low-income, deprivation, debt and poor housing.
Advertisement
Advertisement
This site uses cookies to deliver our services.By using our site, you acknowledge that you have read and understand our Cookie Policy, Privacy Policy, and our Terms of Use  Ok, Got it. Close
×