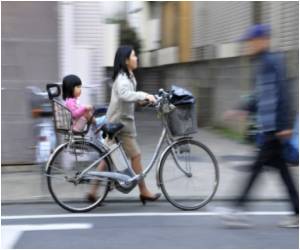 Scientists warn that overly protective parents (or, "helicopter parents") might negatively impact on their children's personalities

A study has found that having "helicopter parents" is associated with being dependent, neurotic and less open.

To Be A Good Parent - Be a Good Spouse First

Want your kids to be happy and successful? Well, then couples should spend less time striving to be perfect parents - and instead try to be perfect spouses.
Advertisement

The study surveyed college freshman to come up with the conclusion.


The term was originally coined by college admissions personnel when they started to notice a change in parents of prospective students - parents would call the admissions office and try to intervene in a process that had previously just been between the student and the college, said study researcher Neil Montgomery, a psychologist at Keene State College in N.H.

Involvement in Pregnancy can Make Men Failures in Parenting

A Brit researcher has said that men who involve themselves in their partner's pregnancy and are present at the time of childbirth can jeopardise the father-child relationship later in life.
Advertisement
"I think what the helicopter parents did is they decided, 'OK we know what good parenting looks like, we're just going to ratchet it up to a new level, and our kids are going to be even better,'" Montgomery said. "The problem is, when they ratcheted it up, they went too far, and in fact, caused an expansion of childhood or adolescence."

To come up with the finding, Montgomery and his colleagues surveyed about 300 freshmen with a questionnaire the researchers specifically designed to assess helicopter parenting. They focused was on college students, because college is a "crisis point" in the relationship between the helicopter parent and the child, Montgomery said. At this stage, the parents no longer have control over their child's life and can't keep track of them like in the past.

Participants had to rate their level of agreement with statements such as, "My parents have contacted a school official on my behalf to solve problems for me," "On my college move-in day, my parents stayed the night in town to make sure I was adjusted," and "If two days go by without contact my parents would contact me," reports Live Science.

About 10 percent of the participants had helicopter parents. The rate was higher in girls than in boys, with 13 percent of the females being helicoptered compared with just 5 percent of males. And it was mainly mothers doing the hovering, Montgomery said.

"We have a person who is dependent, who is vulnerable, who is self-conscious, who is anxious, who is impulsive, not open to new actions or ideas; is that going to make a successful college student?" Montgomery said. "No not exactly, it's really a horrible story at the end of the day." (ANI)

The results were presented May 29 at the Association of Psychological Science Convention in Boston.

Find a Doctor Accident and Trauma Care Drug - Food Interactions Sinopril (2mg) (Lacidipine) Drug Interaction Checker Hearing Loss Calculator A-Z Drug Brands in India Blood - Sugar Chart The Essence of Yoga Sanatogen
This site uses cookies to deliver our services. By using our site, you acknowledge that you have read and understand our Cookie Policy, Privacy Policy, and our Terms of Use