One of the World's Worst Jobs: Mining Sulphur on a Volcano 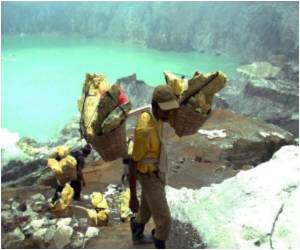 A thick, acrid smoke stings his eyes but Bambang presses on down the side of Indonesia's Kajah Iwen volcano, bending under the weight of the sulphur he carries on his shoulders.

To avoid the highly toxic gas, the young man of 22 bites on a wet cloth. "I don't have enough money to buy a gas mask," he said.

Bambang is one of 350 sulphur miners who eke out a dangerous and exhausting living on the active volcano, in the extreme east of Java island.


His 70-kilogramme (154-pound) haul of "yellow gold" -- or brimstone as it is known in the Bible -- will be bought by local factories and used to refine sugar or make matches and medicines.
Advertisement
"Nothing has changed here for decades. Nothing is mechanised. The men do everything by hand," said Suharsono, the 55-year-old mining supervisor who has spent 35 years on Kawah Ijen.

For Bambang and his colleagues, the obstacle course begins at the bottom of the crater, on the shore of a large turquoise lake considered the most acidic in the world.

This is where they extract the liquid sulphur as it flows out of hot iron pipes. Once in the open air, it cools, crystallises and turns bright yellow.

The sulphur is then loaded into wicker baskets at either end of bamboo yokes and carried back over the lip of the crater and down the side of the volcano, a treacherous journey of four kilometres (2.5 miles).

Every day up to 14 tonnes of sulphur are extracted from Kawah Ijen this way.

"It's an extremely hard job, physically. On some evenings, my shoulders are like jelly," said Jailami, 41, whose wiry frame is all muscle.

"Some visitors tell us this is one of the worst jobs in the world. Not for me. I'm just happy to get it. In my village there are no other opportunities."

Most of the miners have hacking coughs and teeth stained yellow from inhaling sulphur dioxide, but health is clearly not their priority.

"I don't think I have more health problems than other people down the valley," Suharsono said.

The porters get about 600 rupiah (50 cents) a kilo and make up to 80,000 rupiah a day for two trips into the fuming crater, a relatively good income compared to many of their neighbours.

"It's a good reward for us, three times higher than growing rice," enthused Bambang.

Even more than an eruption of lava, the miners fear the sulphuric acid in the lake. Emissions of toxic gases from the lake killed seven porters in the 1970s, a tragedy not forgotten by today's workers.

Accessible only by a rutted road through a lush forest, the volcano attracts a few thousand tourists a year. Most are French, drawn by the work of documentary maker Nicolas Hulot.

Indonesia has more than 75 historically active volcanoes, more than any other country.

In the future they will be a major source of clean geothermal energy, in line with government plans to attract billions of dollars of investment in high-tech power plants.

In the meantime the miners of Kawah Ijen will extract the volcano's mineral wealth the only way they know how, with bent backs and bare hands.

One of the World's Worst Jobs: Mining Sulphur on a Volcano Personalised Printable Document (PDF)