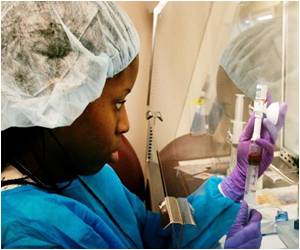 A signaling pathway in cancer cells that controls their ability to invade nearby tissues in a finely orchestrated manner has been discovered by scientists. The findings offer insights into the early molecular events involved in metastasis, the deadly spread of cancer cells from primary tumor to other parts of the body. The study was published today in the online edition of Nature Cell Biology.

To migrate from a primary tumor, a cancer cell must first break through surrounding connective tissue known as the extracellular matrix (ECM). The cancer cell does so by forming short-lived invadopodia--foot-like protrusions these cells use to invade. Invadopodia release enzymes that degrade the ECM, while other protrusions pull the cancer cell along, much like a locomotive pulls a train. The invading cancer cell relies on the cycle of invadopodium formation/disappearance to successfully travel from the tumor and enter nearby blood vessels to be carried to distant parts of the body.

The skin is the largest organ of the body, comprising of two main layers - the epidermis and the dermis. This quiz on skin cancer will help you brush up your knowledge on this topic.
Advertisement

"We've known for some time that invadopodia are driven by protein filaments called actin," said study leader Louis Hodgson, Ph.D., assistant professor of anatomy and structural biology at Einstein. "But exactly what was regulating the actin in invadopodia was not clear."


Previous studies had suggested that a protein called Rac1 played a role in cancer-cell invasion. When Rac1 levels are elevated, cancer cells display more invasive characteristics. But this suspected Rac1 activity in invadopodia had never been directly observed, only indirectly inferred.

World Cancer Death Clock is a dynamic calculator that constantly updates the number of people in the world dying due to various cancers.
Advertisement
To surmount this hurdle, Dr. Hodgson and his colleagues in the Gruss Lipper Biophotonics Center at Einstein devised a new fluorescent protein biosensor that, combined with live-cell imaging, revealed exactly when and where Rac1 is activated inside cancer cells.

Using this biosensor in highly invasive breast cancer cells taken from rodents and humans, the Einstein team discovered that when an individual invadopodium forms and is actively degrading the ECM, its Rac1 levels are low; on the other hand, elevated Rac1 levels coincide with the invadopodium's disappearance. "So high levels of Rac1 induce the disappearance of ECM-degrading invadopodia, while low levels allow them to staywhich is the complete opposite of what Rac1 was thought to be doing in invadopodia," said Dr. Hodgson.

To confirm this observation, the researchers used siRNAs (molecules that silence gene expression) to turn off the RAC1 gene, which synthesizes Rac1 protein. When the gene was silenced, ECM degradation increased. Conversely, when Rac1 activity was enhancedusing light to activate a form of the Rac1 proteinthe invadopodia disappeared.

In subsequent experiments, the Einstein team deciphered other parts of the Rac1 signaling cascade during invasion and showed that this signaling mechanism is regulated differently in normal breast epithelial cells.

Most of the 580,000 U.S. cancer deaths each year are caused by complications from the spread of cancer to distant tissues and organs, rather than from the primary tumor itself. So throwing a monkey wrench into the inner workings of invasive tumor cellsperhaps with a drug that prevents them from locally activating or inhibiting Rac1could be extremely useful.

"Rac1 inhibitors have been developed," Dr. Hodgson said, "but it wouldn't be safe to use them indiscriminately. Rac1 is an important molecule in healthy cells, including immune cells. So we'd need to find a way to shut off this signaling pathway specifically in cancer cells."

Did u know that simple changes in lifestyle could lower your cancer risks? Find out how!
Advertisement
<< Vintage Wine Collection Fetches 2.3 Million Pounds for Ferg...
Pitch-Detection Secrets of the Inner Ear Unlocked >>

Accident and Trauma Care Loram (2 mg) (Lorazepam) Drug - Food Interactions Drug Interaction Checker Post-Nasal Drip Find a Hospital Calculate Ideal Weight for Infants Pregnancy Confirmation Calculator Daily Calorie Requirements Sanatogen
This site uses cookies to deliver our services. By using our site, you acknowledge that you have read and understand our Cookie Policy, Privacy Policy, and our Terms of Use