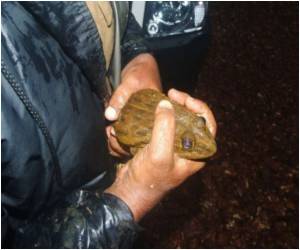 Scientists at Northwestern University and the Karlsruher Institut fur Technologie in Germany, in collaboration with the Advanced Photon Source at the U.S. Department of Energy's Argonne National Laboratory, X-rayed an embryo during gastrulation, the period when its hundreds of cells start to organize into differentiated tissues that eventually form the nervous system, muscles and internal organs.


Studies of African clawed frog embryos can provide clues to the evolution of vertebrates and how human genes turn on or off to create diseases.

Until now, however, it has been difficult to study these embryos. Classical absorption imaging requires a contrast agent and large X-ray dose that can harm living organisms.
Advertisement
Researchers from the German synchrotron ANKA proposed a new method of nondestructive analysis using X-ray diffraction.

In the experiment, Xianghui Xiao, a scientist at the APS who collaborated on the work, and his colleagues took regular 15-second exposures separated by periods of 10 minutes over the course of two hours of different gastrulas.

The resulting 13 time-lapse scans provided a detailed portrait of the transfiguration of the frog cells.

The scientists discovered new morphological structures and clarified the process for redistributing fluid in the embryo. They also were able to locate the areas of the embryo that were driving the migration of tissues and cells during gastrulation.

The findings have been published in the journal Nature.

Human Heart Health Secrets may Lie in Frog Embryos
The process of tissue formation in the human heart has been unraveled in research on frog embryos....