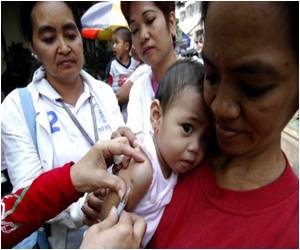 Pathogens associated with moderate-to-severe diarrhoea in infants have been discovered by scientists. The Global Enteric Multicenter Study (GEMS) was designed to identify the aetiology and population-based burden of paediatric diarrhoeal disease in sub-Saharan Africa and south Asia.

It is a 3-year, prospective, age-stratified, matched case-control study of moderate-to-severe diarrhoea in children aged 0-59 months residing in censused populations at four sites in Africa and three in Asia.

The researchers said that recruited children with moderate-to-severe diarrhoea seeking care at health centres along with one to three randomly selected matched community control children without diarrhoea.


From patients with moderate-to-severe diarrhoea and controls, they said they obtained clinical and epidemiological data, anthropometric measurements, and a faecal sample to identify enteropathogens at enrolment.
Advertisement
One follow-up home visit was made about 60 days later to ascertain vital status, clinical outcome, and interval growth.

By analysing adjusted population attributable fractions, they found that most attributable cases of moderate-to-severe diarrhoea were due to four pathogens: rotavirus, Cryptosporidium, enterotoxigenic Escherichia coli producing heat-stable toxin (ST-ETEC; with or without co-expression of heat-labile enterotoxin), and Shigella.

They also found that odds of dying during follow-up were 8.5-fold higher in patients with moderate-to-severe diarrhoea than in controls.

New methods and accelerated implementation of existing interventions (rotavirus vaccine and zinc) are needed to prevent disease and improve outcomes, they added.

The research was published in Lancet.

Shigellosis
Shigellosis or Bacillary Dysentery is a common cause of gastro-enteritis worldwide and can cause ......

Unicef Launches New Program to Contain Diarrhea Among Children in India
Unicef announced the launch of a new program costing around $5 million through which it hopes to ......