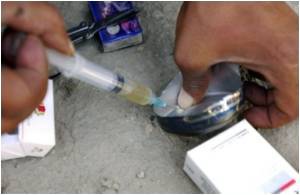 Researchers from Johns Hopkins School of Public Health and other centers, led by Shruti H. Mehta, PhD, MPH, report the findings in the March 1 issue of The Journal of Infectious Diseases, now available online.

Previous data had suggested that HIV incidence among IDUs has declined. This trend is often attributed in part to harm reduction measures, including needle exchange programs and substance abuse treatment. However, these measures have not been as successful in lowering the rates of HCV incidence and prevalence. For example, HCV infection is nearly 10 times more transmissible by sharing needles than is HIV infection. Sharing a needle even once can be enough to transmit HCV.

Hepatitis B is inflammation of the liver due to infection with the hepatitis B virus.
Advertisement
According to researchers, these data suggest that "current prevention efforts delay but do not prevent HCV at the population level and will need to be further intensified to reduce risk of HCV infection to the level of HIV." Efforts on both the prevention and the treatment fronts to reduce the reservoir of HCV-infected IDUs will have to be expanded, the investigators concluded.

In an accompanying editorial, Jason Grebeley, PhD, and Gregory J. Dore, MB BS, MPH, PhD, of the University of New South Wales in Australia, agreed that higher prevalence of HCV infection and greater transmission risk following an injection with a contaminated syringe as compared to HIV have hampered harm reduction measures. They also noted that current implementation of harm reduction measures in most settings is inadequate. Rates of equipment sharing remain high, and access to opioid substitution therapy and other drug treatment programs is limited.

The editorial authors also pointed out the impact that an HCV vaccine could have on new cases of HCV infection. Though a highly efficacious vaccine has not yet been discovered, efforts to do so are crucial. They suggested that even though the window for preventing HCV may be small, improvements in HCV prevention are feasible.

World Hepatitis Day is celebrated on May 19th 2010. The theme for 2010, "This is Hepatitis" seeks to convey a clear picture about the condition.
Advertisement
<< Cancer Drug Aids in Regeneration of Spinal Cord Injuries
Four-year-old US Girl Dies of Extreme Alcohol Poisoning >>

Find a Hospital Vent Forte (Theophylline) Nutam (400mg) (Piracetam) Find a Doctor Noscaphene (Noscapine) Iron Intake Calculator Blood - Sugar Chart Accident and Trauma Care Diaphragmatic Hernia Blood Pressure Calculator
This site uses cookies to deliver our services. By using our site, you acknowledge that you have read and understand our Cookie Policy, Privacy Policy, and our Terms of Use