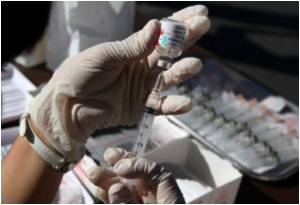 Scientists have identified that regeneration obstacles after a spinal cord injury is reduced by the use of cancer drug Taxol.

After a spinal cord injury a number of factors impede the regeneration of nerve cells. Two of the most important of these factors are the destabilization of the cytoskeleton and the development of scar tissue. While the former prevents regrowth of cells, the latter creates a barrier for severed nerve cells.

Researchers have shown the reversal of long-term hind-limb paralysis.
Advertisement

Taxol, the trade name of a drug currently used for cancer treatment, has now been shown to promote regeneration of injured central nervous system (CNS)-nerve cells.


The scientists report that Taxol promotes regeneration of injured CNS-nerve cells in two ways: Taxol stabilizes the microtubules so that their order is maintained and the injured nerve cells regain their ability to grow.

Recovery from Spinal Cord Injury Could be Improved by Enzyme Treatment

Scientists at the Johns Hopkins University School of Medicine have found that spinal cord treatment with an enzyme can improve nerve regrowth, motor recovery and nervous system function.
Advertisement
In addition, Taxol prevents the production of an inhibitory substance in the scar tissue. The scar tissue, though reduced by Taxol, will still develop at the site of injury and can thus carry out its protective function. Yet growing nerve cells are now better able to cross this barrier.

Experiments in rats performed by this group verified the effects of Taxol. These researchers supplied the injury site after a partial spinal cord lesion with Taxol via a miniature pump. After just a few weeks, animals showed a significant improvement in their movements.

"So far we tested the effects of Taxol immediately after a lesion", explains Farida Hellal, the first author of the study.

The study has been published in the online issue of the journal Science.

Cancer, is the second most leading cause of death worldwide. Cancer is not just one disease but many diseases. There are more than 100 different types of cancer. Take this quiz on and test how much you know about cancer.
Advertisement
<< Watching TV Coverage of Terrorist Events Impacts Mental Wel...
Study Finds Slight Drop In Hepatitis C Infections In Inject... >>

Blood - Sugar Chart Find a Doctor Sanatogen Indian Medical Journals Loram (2 mg) (Lorazepam) Calculate Ideal Weight for Infants Hearing Loss Calculator The Essence of Yoga Drug Side Effects Calculator Sinopril (2mg) (Lacidipine)
This site uses cookies to deliver our services. By using our site, you acknowledge that you have read and understand our Cookie Policy, Privacy Policy, and our Terms of Use