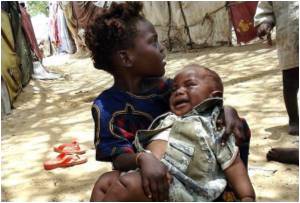 Somalia is the most terrible place to go to school after being crippled by years of civil war.

The battle for Mogadishu becomes more bitter by the day and aid agencies in operating in the east African country accuse Somali war lords of forcibly enlisting children into their militias.

"Ongoing conflict, civil unrest and fragility have had a catastrophic effect on education, with the most recent data estimating that only 10 percent of children are enrolled in primary school," said the Global Campaign for Education (GCE) report, released on the sidelines of the UN Millennium Development Goals summit.


Somalia was one of four countries where more than 70 percent of the population is illiterate, GCE said.

It came bottom of a table of the world's 60 poorest countries, just behind Eritrea, Haiti, Comoros, Ethiopia, Chad and Burkina Faso.

At least 72 people, mostly children, have died in an outbreak of acute watery diarrhoea in southern Somalia this month, local officials said Tuesday.
Advertisement
"The 'School Report' table findings paint a stark picture of the lives of children from around 60 of the poorest countries, demonstrating that a dramatic upscaling of effort is needed in order to give the next generation better prospects than their parents," said the report.

"A country like Chad, languishing close to the bottom of our table, has shocking indicators across the board: just 14 percent of its population go to school for five years, child labor and early marriage are rife, and two-thirds of adults cannot read or write."

The report said Nigeria has more children out of education than any other country in the world -- 8.2 million.

"This is made all the more appalling by the fact that Nigeria is far from poor, by African standards. On paper at least it is among the continent's richest countries, the world?s sixth largest producer of crude oil."

GCE, which was backed by aid groups such as Oxfam, Save The Children and Action Aid, in making the report, said that "decades of failure to invest in education have left the basic school system hardly functioning" in Nigeria.

Adult illiteracy remains "a major stain" on efforts to end poverty with 759 million adults, the majority of them women, unable to read and write, said the campaign.

Haiti has always had a poor education record and was bottom of the rankings in 2008, with just half of children attending primary schools. The earthquake in January has made education in the impoverished state even more desperate, with 80 percent of schools destroyed.

GCE said that fewer than 20 percent of Afghan women are literate and barely any girls in rural areas were allowed to go to school.

The campaign criticised wealthy countries for failing to provide promised funds for education.

The report also gave marks to donor countries for their contribution to the financing needed for universal education, based on their respective wealth. Norway came top and the United States bottom.

"The miserly performance of the G8 nations plays a major part in holding back progress -- some 87 percent of the gap is attributable to their failure to pay up," said the report.