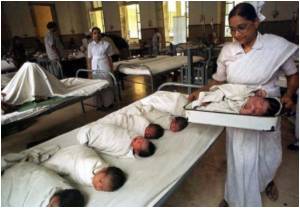 India has been accused by a leading rights group of cheating its people in claiming to have worked on improving maternal health.

Human Rights Watch said the government in New Delhi was wrong to focus on the number of women who give birth in health facilities as a measure of progress rather than how many survive the delivery and post-delivery period.

The group's Asia women's rights researcher, Aruna Kashyap, said in a statement Monday that the authorities were "playing number games with women's lives" and "dangerously misleading the public".


Reducing maternal mortality is the fifth of the eight Millennium Development Goals adopted by world leaders in 2000 and set to be achieved by 2015.

There is a general belief that a pregnant woman should eat for two people. How far is this true? This compilation of information, presented in the quiz, will tell you more.
Advertisement
World leaders are in New York to look for fresh ways to meet the targets, which are badly behind schedule.

More women -- about 100,000 -- die during pregnancy and childbirth in India than anywhere else in the world every year, according to the World Health Organization.

India says it is "on the right track" to cutting the rate because 10 million women gave birth in health facilities in 2009-10.

The UN's special rapporteur on health has welcomed progress but said India is unlikely to meet its Millennium Development Goal target and called the rate of maternal deaths "shocking" for a country of its stature and development.

Human Rights Watch said the government should focus on quality of care and safe deliveries as a measure of improvement instead of counting only the number of so-called "institutional deliveries".

The current system fails to take into account women who die because there is no emergency transport to take them to hospital or clinics, while centres themselves were often only able to conduct normal deliveries, the group said.

Women requiring emergency obstetric care were often sent from one hospital to another at their own expense.

There was also a lack of access to the right equipment at clean, uncrowded facilities with properly trained staff and no monitoring was in place to assess the number of deaths after delivery, it added.

Figures were likely to be inflated after researchers found that many new mothers were told to say they had given birth at official facilities when in fact they had their baby at home to receive a government cash incentive.

Women's community groups have had a dramatic effect on reducing neonatal mortality rates in some of the poorest areas on India
Advertisement
Advertisement
This site uses cookies to deliver our services.By using our site, you acknowledge that you have read and understand our Cookie Policy, Privacy Policy, and our Terms of Use  Ok, Got it. Close
×