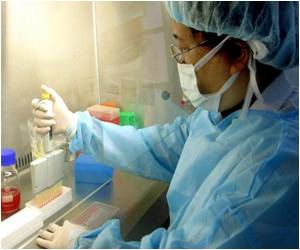 The structure of a protein that plays a central role in the perception of pain and heat has been unveiled by UC San Francisco (UCSF) scientists.

Led by UCSF postdoctoral fellows Erhu Cao, PhD, and Maofu Liao, PhD, the new research will offer fresh insights to drug designers searching for new and better pain treatments, but it also is a watershed for the field of structural biology, which aims to discover how proteins are physically constructed in order to better understand their function.

Until now the method used in the new research, known as electron cryo-microscopy, or cryo-EM, was thought to be incapable of visualizing small proteins in such great detail.


"The impact will be broad," said electron microscopist Yifan Cheng, PhD, UCSF associate professor of biochemistry and biophysics and co-senior author of the two papers, which report the structure of the protein, known as TRPV1 (pronounced "trip-vee-one"), at a resolution of 3.4 Angstroms. (For comparison, a sheet of paper is about 1 million Angstroms thick.) "In the past, people never believed that you would be able to use this method to get this kind of resolutionit was thought to be impossible. This opens up a lot of opportunity."
Advertisement
The findings are published in the December 5, 2013 issue of Nature.

TRPV1 has unique properties that have intrigued both biologists and the general public since it was first identified in 1997 by David Julius, PhD, professor and chair of UCSF's Department of Physiology, and co-senior author of the new cryo-EM papers.

Found in abundance in sensory nerve cells, TRPV1 is an ion channel: it forms a pore in the cell membrane through which ions such as calcium may pass, altering the cell's propensity to generate action potentials and pass on signals to other neurons.

But unlike other ion channels, TRPV1 responds to either chemicals or temperature changes. For example, TRPV1 will change its shape to open its channel in the presence of capsaicin, the pungent compound that lends chili peppers their fiery zing, but also in response to temperatures high enough to elicit pain.

Julius and colleagues have shown that a range of pain-inducing toxins and inflammatory compounds derived from sources as diverse as spider toxins and plants will also activate TRPV1, links that have made the protein the focus of intense interest among drug developers.

The first of the two new papers in Nature describes the structure of TRPV1 in its resting state, while the second shows how the TRPV1 channel changes shape when bound to a spider toxin and a capsaicin-like compound. The visualizations support a "two-gate" model of TRPV1 activation in which different sections of the channel can change conformation in response to different chemical agents, information that will be valuable to drug designers hoping to modulate the pain response by precisely controlling TRPV1 gating.

"It's a bit like seeing snapshots of the channel closed, then partially opened, then fully opened, which is exceedingly rare for an ion channel," Julius said.

Before the new Nature papers, said Cheng, "the best resolution for structures of TRPV1 and similar proteins was about 15 to 20 Angstroms, and many of the structures derived from the low-resolution data lacked sufficient detail to be mechanistically informative." According to Julius, many structural biologists have considered cryo-EM to be inherently inferior to X-ray crystallography, which in the best cases can achieve resolutions of less than 2 Angstroms, with some dismissing cryo-EM as "blob-ology."

But as its name suggests, X-ray crystallography requires that proteins of interest be crystallized, which can be extremely difficult to achieve with proteins like TRPV1 that are embedded in cell membranes. Such proteins, known as integral membrane proteins, are crucial players in important realms of biology, including cell signaling and the actions of drugs.

Beginning about four years ago, Cao, a postdoctoral associate in the Julius laboratory who shares first authorship with Liao on the two new papers, began to create highly stable, functional copies of TRPV1 that he hoped to use in X-ray crystallography studies, but the protein stubbornly resisted crystallization.

"We wondered," said Julius, "Is there another way to get structural information out of this beautifully well behaved and functional protein in the absence of having crystals?"

In a hallway encounter, Julius learned that Cheng and David A. Agard, PhD, professor of biochemistry and biophysics at UCSF and a Howard Hughes Medical Institute (HHMI) investigator were making significant technical advances in cryo-EM, and he encouraged Cao to collaborate with Liao, a postdoctoral associate in Cheng's lab, on cryo-EM studies of TRPV1.

In cryo-EM, a sample is created by placing many copies of a protein, called single particles, in an aqueous solution. The sample is plunged into liquid ethane, which cools the solution at the rate of 100,000 degrees Celsius per second, suspending the particles at myriad angles at minus 172 degrees Celsius in a protective glassy ice.

An electron microscope is then used to image the sample, and researchers feed images of the particles into powerful computers, which combine the information from the many two-dimensional views to calculate the object's three-dimensional structure.

With support from HHMI, Agard and colleagues designed a new camera for cryo-EM that directly captures electrons rather than first converting electrons to light, as did previous cameras. Meanwhile, taking advantage of the new camera's 400 frames-per-second speed, Xueming Li, PhD, a postdoctoral associate in the Cheng and Agard labs, devised a motion-correction algorithm that further improved resolution. The combined innovations in hardware and software, reported in Nature Methods last May, resulted in a great improvement in resolution over conventional cryo-EM.

"The picture is like a movie, and you can compensate for minute movements of the sample," said Cheng. "Now we can record every single image of the sample at 3-Angstrom resolution."

Using these new cryo-EM technologies, which significantly improved resolution, in a matter of months Cao and Liao visualized TRPV1 at 3.4 Angstroms, an unprecedented achievement in single-particle cryo-EM of integral membrane proteins.

Now that they have successfully visualized TRPV1 bound to some of its chemical partners, the team hopes to determine how the protein changes shape when exposed to heat, by first heating the sample and then quickly cooling it for scanning.

Julius said that the ability to accurately capture a protein's shape changes is one of the great strengths of cryo-EM, and he anticipates that many structural biologists, even those who favor X-ray crystallography, will add cryo-EM to their toolkit, thanks to advances made in Cheng and Agard's UCSF labs.

"These papers report the structure of TRPV1, but they also showcase the utility of cryo-EM as a method for structure determination, and that it's also potentially a very powerful technique for looking at a protein in multiple conformations," he said.

Julius said that despite the fact that the research team used new methods to determine TRPV1's structure, his long acquaintance with the biochemical aspects of the protein gives him great confidence in its accuracy.

And even though he could almost visualize TRPV1 in his mind's eye after more than 15 years' work on the protein, he said there is something "primal" about seeing images of single TRPV1 particles arrayed on a computer monitor.

"When you see the structure of TRPV1, and you know that it fits the data so well, there's a kind of visceral, emotional reaction where you look at it and you think, 'Now we really know what this thing looks like.'"

Ear Pain - Symptom Evaluation
Ear pain is either due to a condition that affects the ear, or is referred from the surrounding ......

Bothersome Pain Afflicts Half of Older Americans, Says Study
More than half of older adults in the United States have experienced bothersome pain impairing ......

A Painless Outcome Offered To Diabetics By New Breathalyzers
A breathalyzer that may help control blood sugar by measuring the amount of acetone in the breath .....